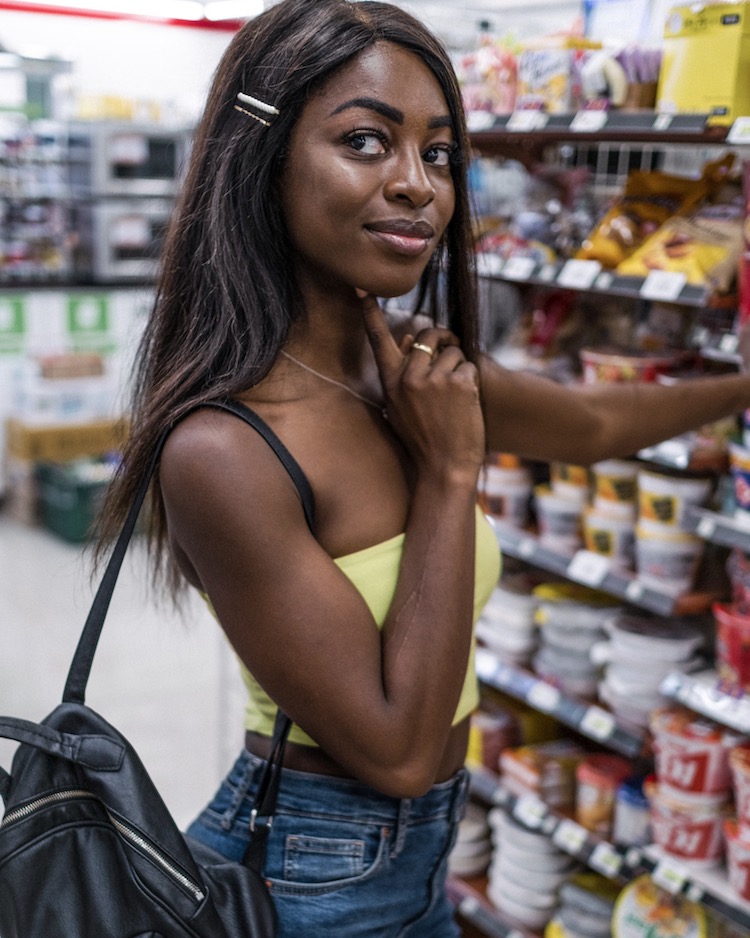 In September I spent just over a week travelling solo in Seoul, South Korea. Now, in the months following, I find myself longing for the tantalizing tastes and the mountains of kimchi at every opportunity.

If you’re wondering what to eat in Seoul, then I hope this in-depth guide will help you satiate your hunger. Here you can expect to find everything you need to know from eating customs to tipping and, of course, where to find the best Korean food in Seoul. 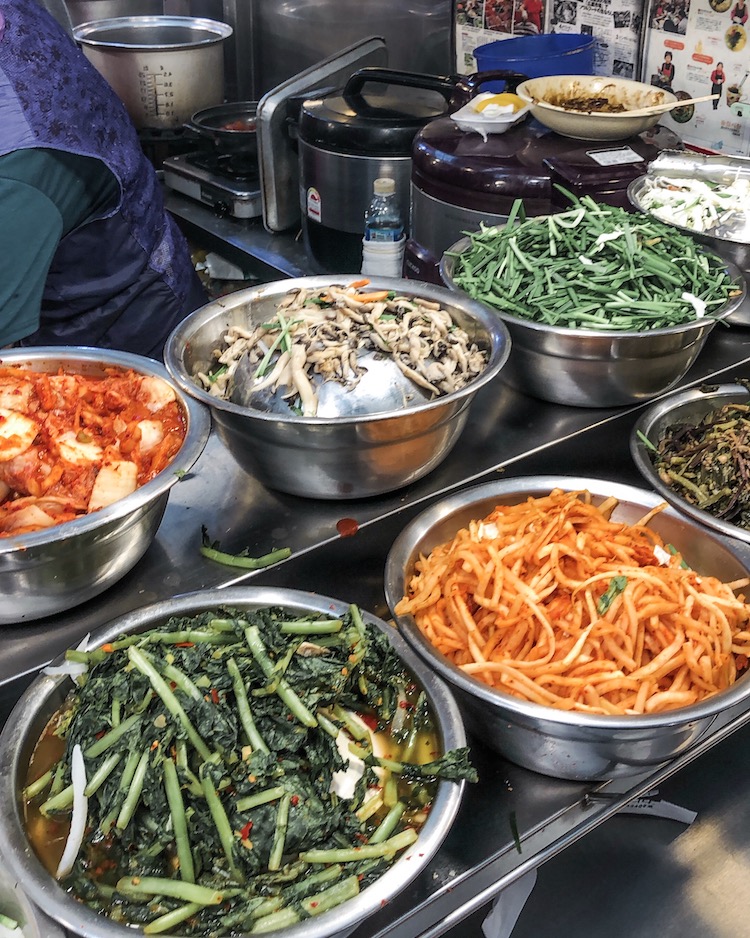 I’ve found that immersing yourself into a city’s culture really begins with the local cuisine. Eating gives you an idea of the country’s past and present. From hearty meals for special occasions to modern takes on old classics. You hear stories of times gone by and learn to challenge what you thought you knew about tastes and textures.

What I loved about eating in Seoul was that it was about so much more than just fulfilment of hunger. In fact, eating is very much considered a shared social experience between family and friends. Many of the dishes are catered on the basis of sharing, much like the breaking of bread. As a solo traveller eating traditional Korean food in Seoul was the perfect opportunity to bond with new friends over collective gluttony.

How much is food in South Korea? 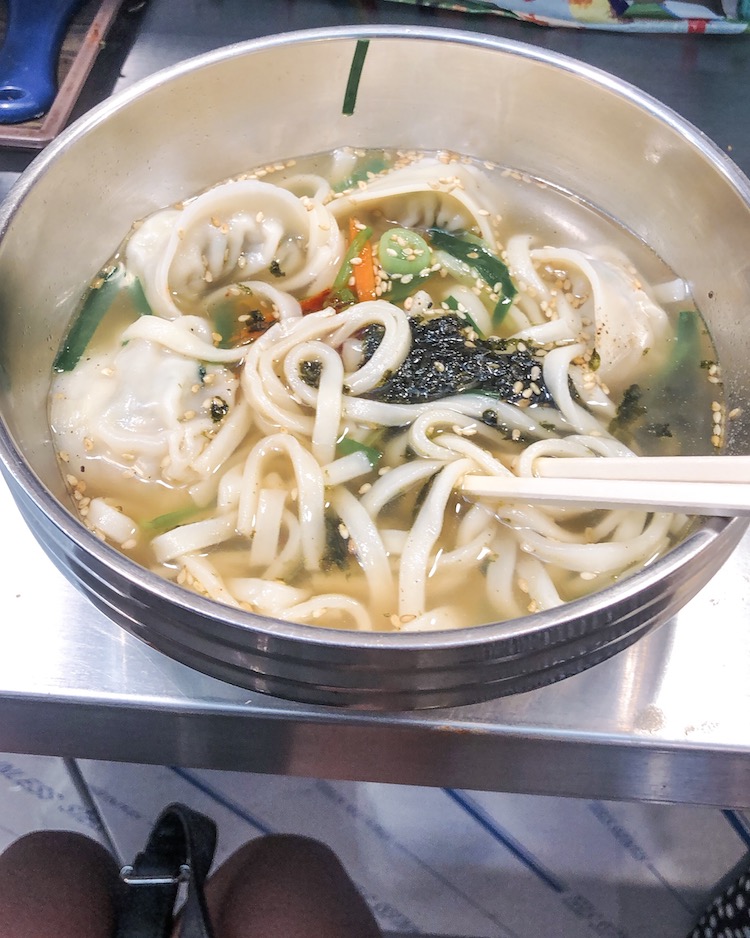 In my experience, the food in Seoul was definitely expensive and probably comparable to prices in Japan. My most expensive meal was 30$ and my cheapest was $5 which was just a basic bowl of udon noodles at a local market. If you’re on a budget try to choose only one meal to eat out for and buy on the go meals for the others!

What to eat in Seoul – South Korean Dining Etiquette 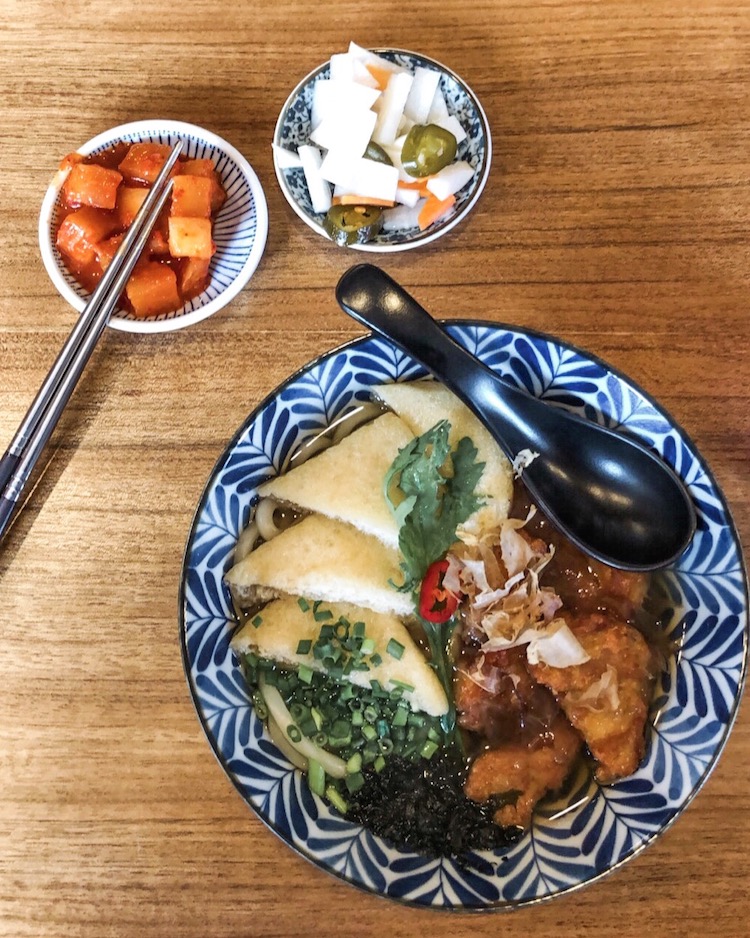 Before you begin your dining experience it’s important to have an overview of South Korean dining etiquette. A few easy to remember tips will ensure you get the most out of your trip to Seoul and that you don’t accidentally offend anyone in the process!

Tipping is not considered customary in South Korea. Often in occasions where you do leave one your server may even refuse to take it! In order to express your gratitude try and remember these Korean phrases aju mashisoyo (it was delicious) and kamsahaminda (thank you). Although my pronunciation may have been a bit off these two phrases were always met with welcome smiles.

Unlike chopsticks I was used to using in other countries, the traditional chopsticks in South Korea were flat and metal. Apparently these originated from the Korean royal family who used them as a means of detecting poisoned food. Although I found these harder to eat with than wooden ones, especially for rice dishes, after a little practise you’ll soon get the hang of it.

When eating with locals there are a number of eating and drinking rules you should follow. These typically correlate with the age of your company. As I spent most of my time eating with others from the hostel I didn’t get the chance to experience this but in the off chance that you might this post will get you up to speed.

What to eat in Seoul – Traditional Korean food

In South Korea, you’ll get used to tasting a lot of garlic, red chilli, ginger, sesame & soy. The portions are plentiful. And almost all dishes are accompanied by banchan – an assortment of pickled and fermented vegetables that perfectly hit the spot. Every. Single. Time. Below are some of the best Korean dishes I tried during my 10 day stay in Seoul. 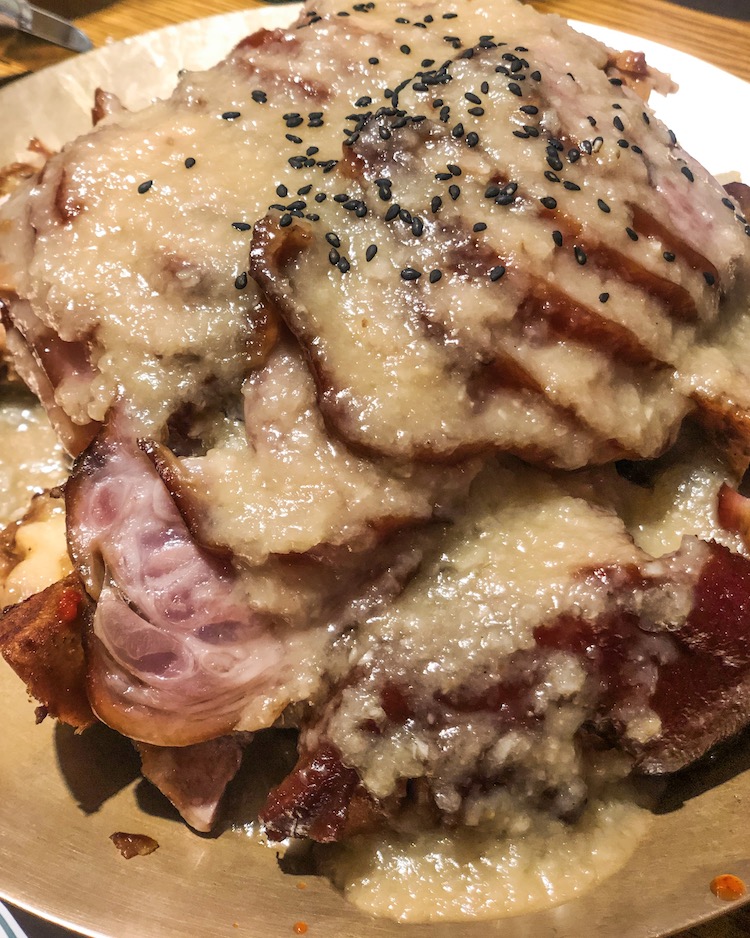 Made with pig trotter braised in soy and various other spices, Jokbal is not a dish for the faint of appetite. Be prepared for heaped slices of juicy pork served with rice, lettuce, banchan and more. The dish is known for having gelatinous cuts of meat that prevent hangovers, but unfortunately, I can’t give an opinion on that! 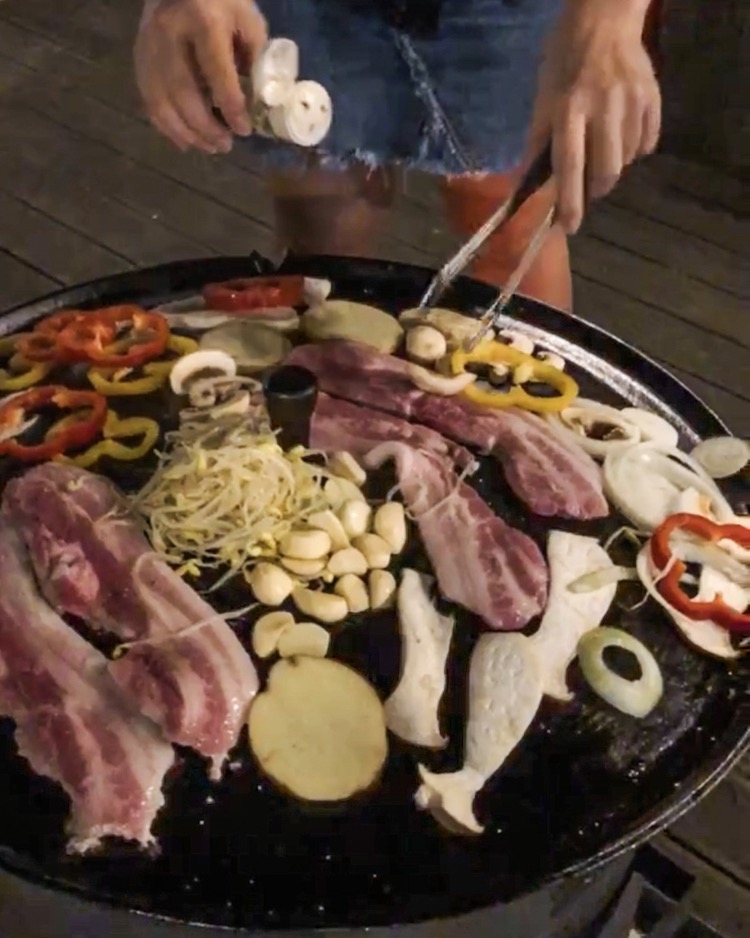 Even if you haven’t been to Korea it’s likely that you’ve heard of Gogi-gui (Korean BBQ). This experience sees each table equipped with a grill or glowing coals to grill meat (most typically beef and pork). To enjoy like the locals spread doenjang-jjigae (soybean paste) into large perilla (similar taste and texture to mint) and salad leaves, then heap in the meat and vegetables before finishing with a healthy amount of garlic and kimchi (spicy fermented cabbage). 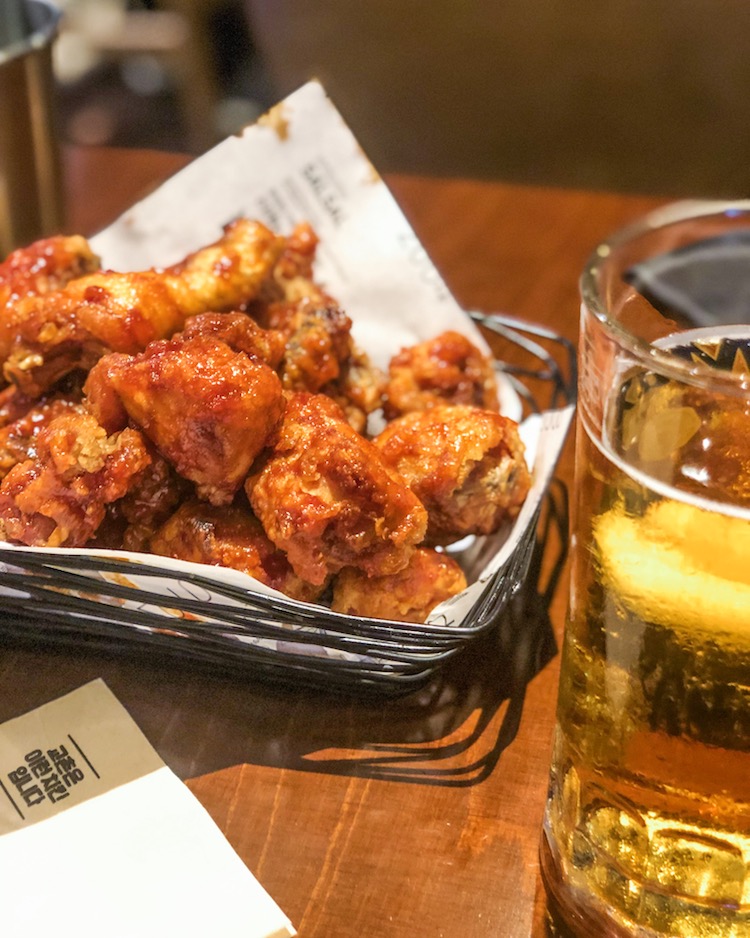 Talking of the old and new Chimaek (fried chicken and beer) is an American dish that is thought to have been popularised in Korean culture by the arrival of the American army base. This dish is enjoyed widely throughout Korea and has become somewhat of a phenomenon to indulge over during an afternoon or evening spent in a local park. But more than just your average serving of fried chicken you can expect the meat to be marinated or coated with a delicious glaze all whilst maintaining that all-important crunch. 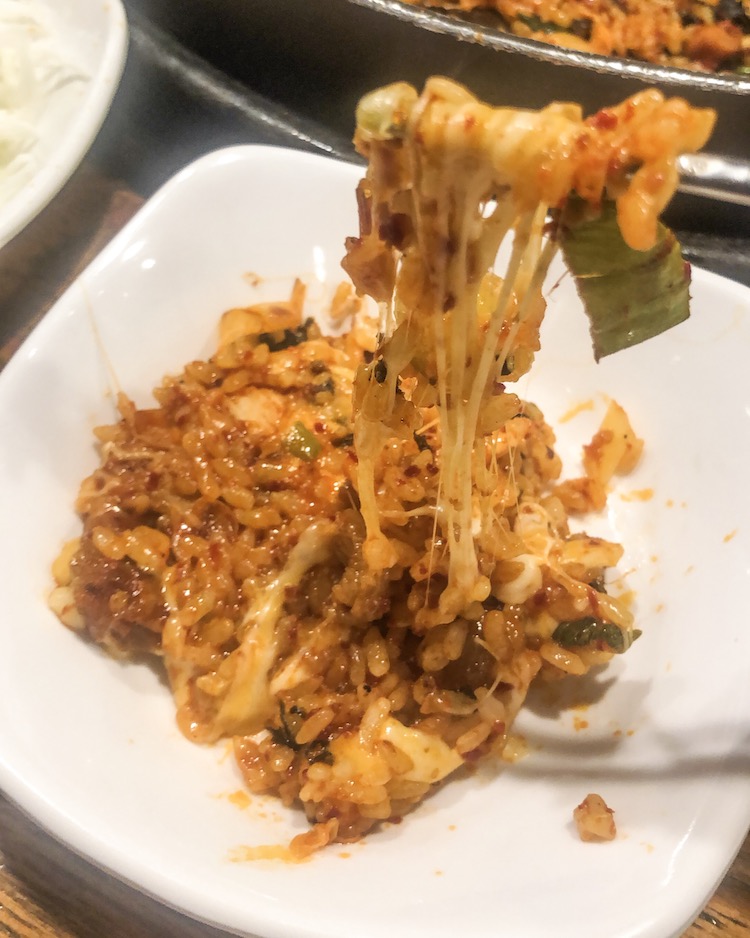 As with many Korean translations, Dak Galbi translates quite literally to ‘dak’ chicken and ‘galbi’ rib. Weirdly, chicken rib is not actually used in the dish. To make Dak Galbi marinated chicken is fried on a hot plate at your table and folded in with rice/noodles and a serving of mozzarella. With crunchy carbs on the outside and gooey cheese in the middle, this is a cheat-meal in every sense of the word.

Kimchi (spicy fermented cabbage) is somewhat of a holy grail when it comes to Korean cuisine and it’s rare that you’ll find a dish that’s served without it. Many Koreans dedicate one day of the year to the arduous task of seasoning and fermenting an annual supply. And it’’s not uncommon to find a special fridge in the homes of locals purely dedicated to Kimchi, which is heralded as more than just a food-stuff but the secret to continued health and glowing skin. 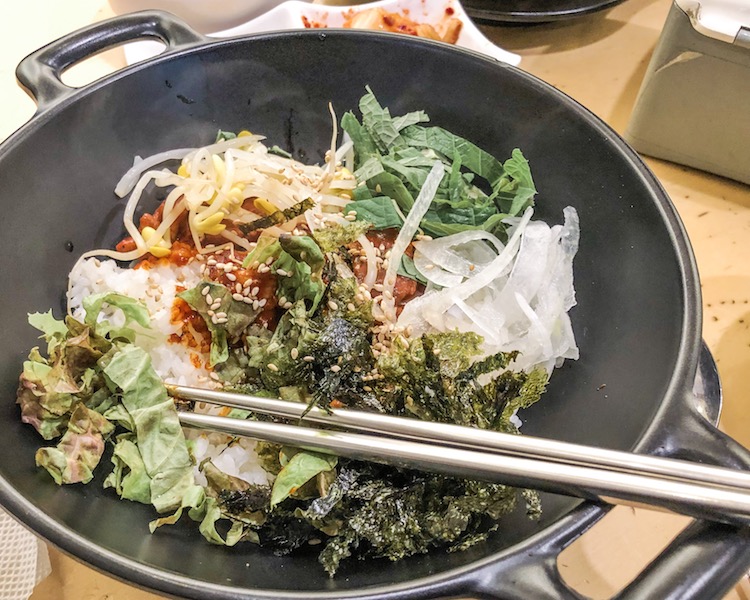 Bibimbap which literally translates to ‘bibim’ mixing ingredients and ‘bap’ rice is exactly as it sounds. A large bowl of Korean comfort food in an assortment of vegetables and rice. Although it sounds simple it’s this simplicity that makes it work so well. It certainly hits the spot after a long day. 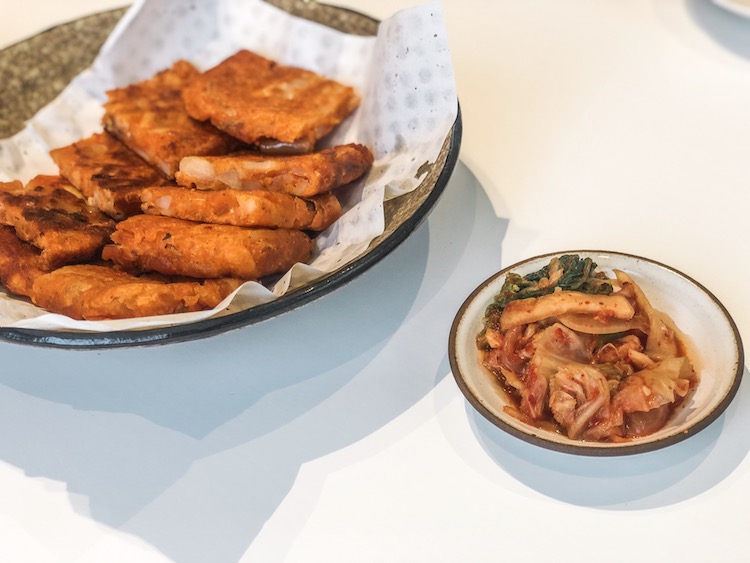 Kimchi Buchimgae or Kimchi pancake is a fried savoury dish in which kimchi takes a starring role. You bite into crunchy, chewy, tangy and without realising have devoured an entire plate. Served with, yup, you guessed it – even more kimchi. 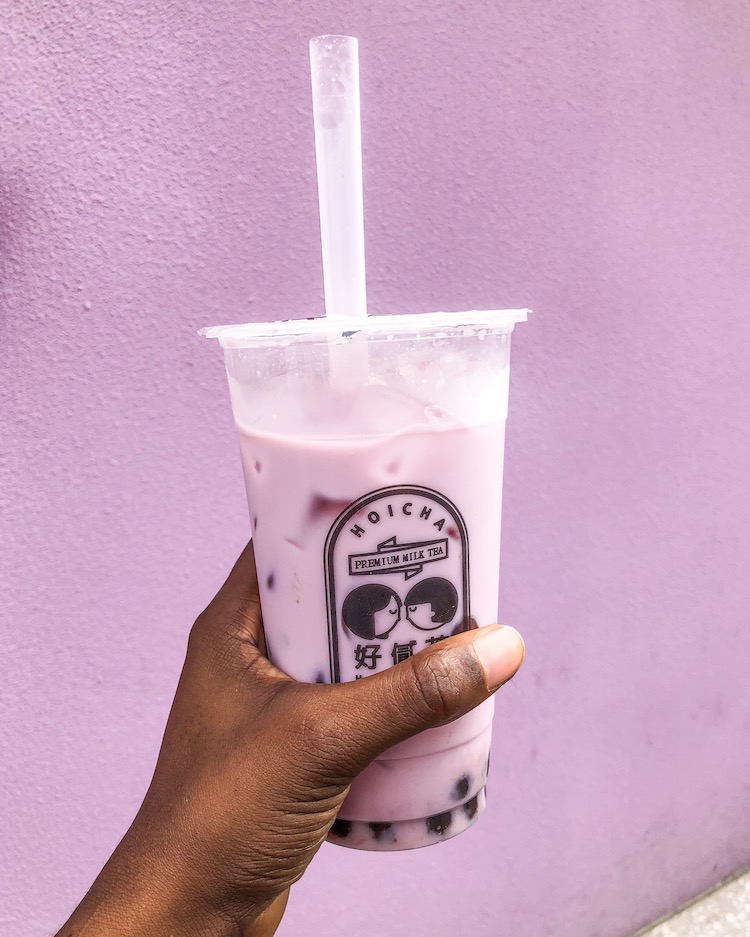 Although bubble tea isn’t Korean (we can thank Taiwan for this glorious invention) there’s nothing quite like it on a hot day exploring the city. Between the icy cooler for your hands and the textured tapioca pearls, it’s certainly a treat.

Don’t forget that the Korean’s like their drinks SWEET. So, if you can opt for a 30-50% sugar level. This will ensure you don’t experience an afternoon high followed very shortly by an epic sugar crash. My go-to order? Taro milk tea. Once you’ve tried it you’ll never look back. 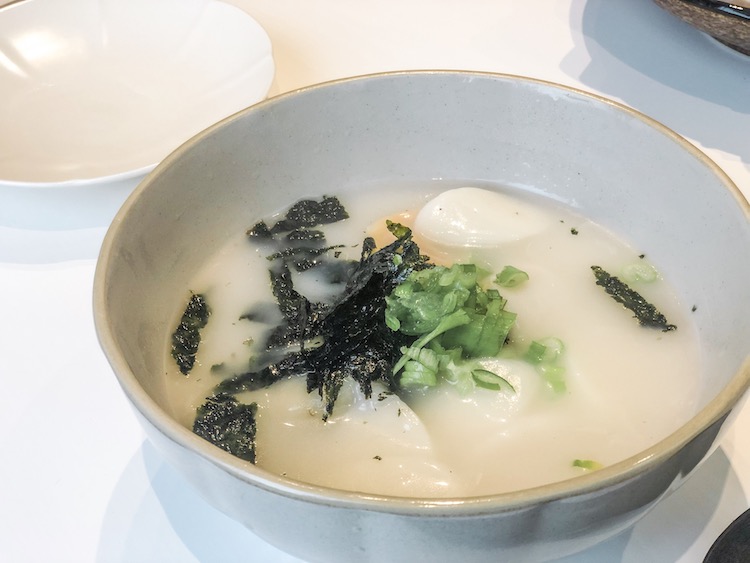 One of the best meals I ate in Seoul was the result of an Airbnb Experience I took part in. After our local guide, Nathan led us on a bike tour around the city we finished up by heading back to his apartment. There his wife had spent the morning preparing us a traditional meal of Duk Mandu Guk (Korean rice cake soup), Kimchi (spicy fermented cabbage) and Kimchibuchimgae (Kimchi pancakes).

I really revelled in the experience of eating in a local’s home and having the opportunity to ask questions about life in South Korea. I’d highly recommend it and it was for sure up there with my trip highlights. If you haven’t yet used Airbnb for accommodation or experiences head to this link to score £44 worth of discounts!

Best places in Seoul to eat 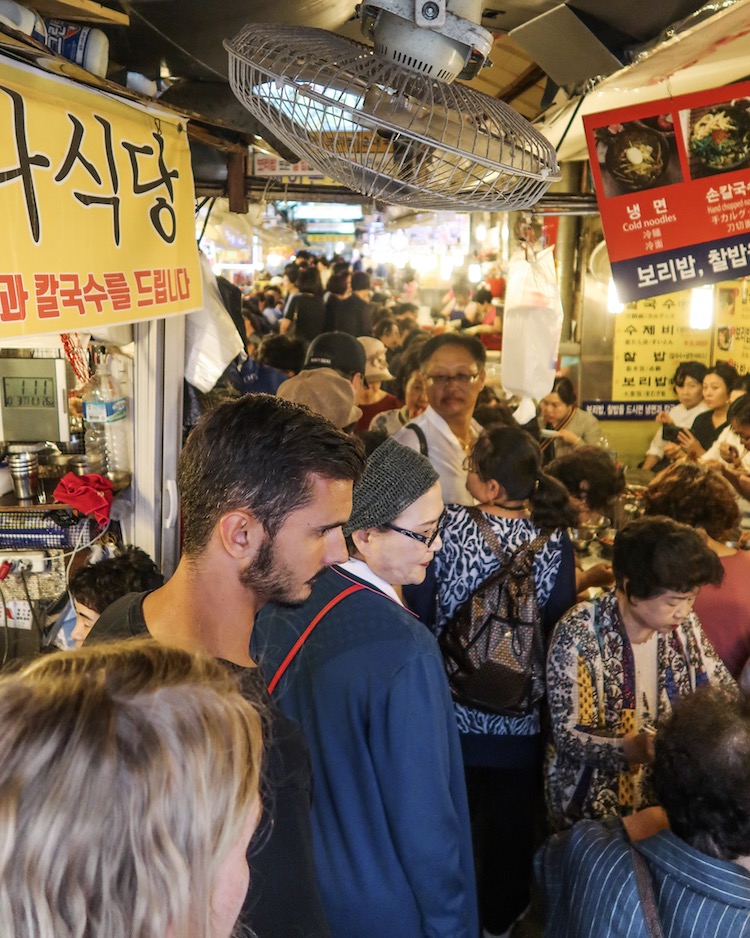 In my experience, the best places to eat in Seoul were the ones teeming with locals. Failing that anywhere with a lengthy queue outside tends to also be a winner. Although you won’t want to spend your whole trip waiting around not really knowing what to expect can be great fun. Often with no English menus, your best bet is to point and hope for the best!

Before you leave Seoul make sure to head to:

Where to eat in Seoul as a solo traveller

As I mentioned before there is a strong culture of sharing food in Seoul. Despite travelling to South Korea solo, I was lucky enough to meet people at the hostel. Though I spent a lot of time with my new friends there were still plenty of times when I ate alone!

One risk you do face a solo traveller in South Korea is being rejected from restaurants that have a sharing culture, although this wasn’t my reality I know it was certainly the case for my friend Rose, who writes about her experiences here.

In restaurants where the portions were bigger, I just ordered it anyway as I didn’t want to miss out. Any excess left (usually quite a bit) I would take back to the hostel in a to-go box to eat another day.

One night I returned back to the hostel after a long hard night of partying and realised I should have picked up a late-night snack. Moments later I sat in the kitchen drunkenly devouring my cold fried chicken from the day before. All the while thinking about what excellent life choices past Efia had made. Make decisions future drunk you will thank you for.

This post is based on some of the best dishes I tried on my trip. It is by no means a guide of everything there is. But hopefully, this will be a great starting place for deciding what to eat in Seoul. Even though I spent ten days there I felt there were so many things I didn’t get to try. When travelling solo it can be more challenging trying to squeeze so many dishes in. However, if you are travelling with a trusty sidekick make sure to opt for different dishes so you can try a range of things.

If you’re planning a trip to South Korea, I hope you get to try all these delicious local dishes and more. But if you don’t have a trip planned any time soon – why not try starting with you local Korean restaurant for your very own foodie adventure?

Have you ever been to Seoul before? Would you like to go? 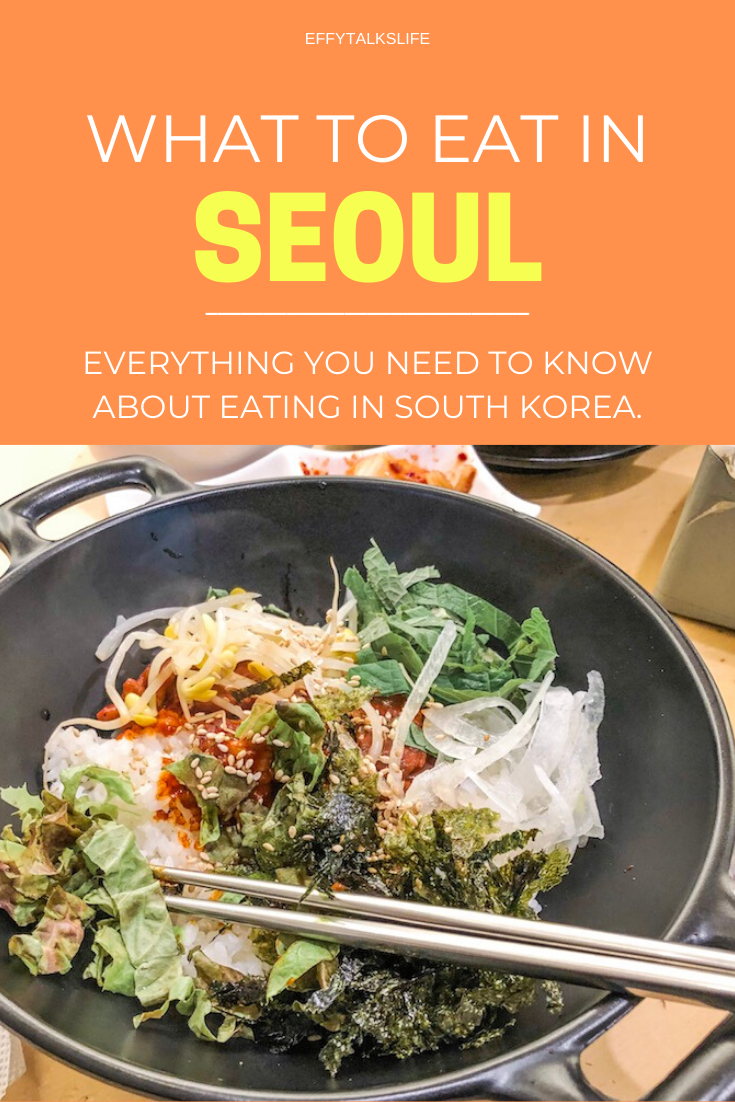