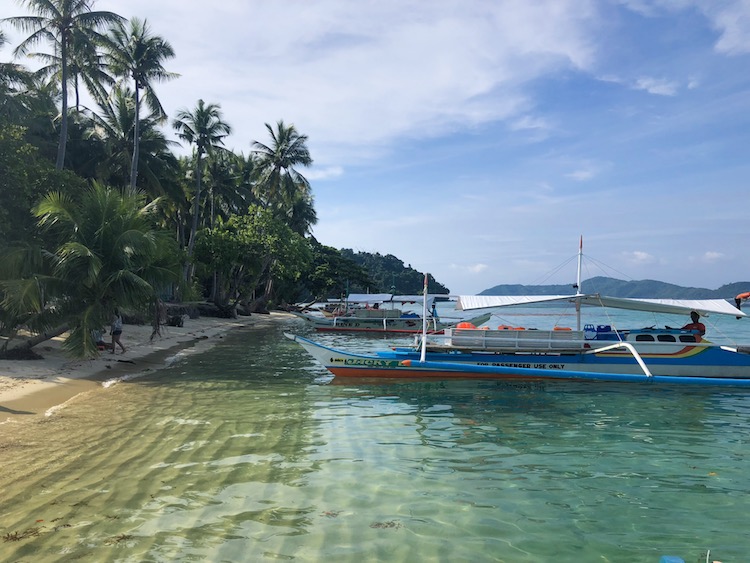 *This post contains affiliate links which means if you decide to purchase anything mentioned, at no extra cost to you, I will earn a small commission that helps towards the cost of running this blog!

Navigating a huge network of islands might at first seem daunting. But once you’ve had a few days to acclimatise you’ll soon become accustomed to life in the fast(ish) lane.

If on the other hand, you don’t want to cut into your precious island time then you’ll want to follow this guide of everything you need to know about transport in the Philippines. Including methods of transport to choose from, how to save money and steps to take to avoid getting scammed.

Arriving in the Phillippines

When arriving into the Philippines it’s likely you’ll land into one of the main two airports:

You most likely won’t want to spend any longer than a day acclimatising to these busy built-up cities. If you’re going to the Philippines for the beautiful beaches, you’ll want to make your way out of the traffic and onto the sand ASAP.

But before we plan that escape route though imma hit you with some important background information. 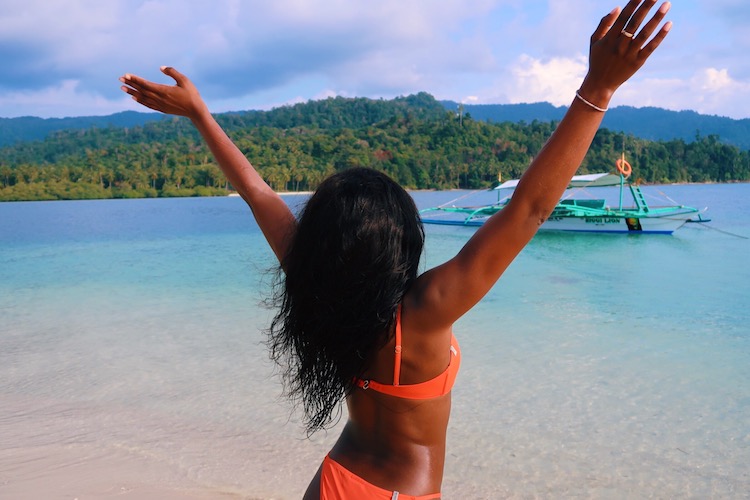 The Phillippines islands are extremely spread out

The Philippines is home to a whopping 7107 islands. While I’m usually an advocate for throwing bras and plans to the wind, I can’t stress enough the importance of having a rough idea of your route organised.

My itinerary was a hot mess. Over the course of four weeks, I took no less than EIGHT internal flights. While I’m glad that I ended up in the ‘right place at the right time’ to meet some incredible people, my bank balance inevitably suffered.

Caution – do not repeat.

Forget everything you thought you knew about the construct of time. From the moment your foot touches the airport you’re in Filipino time, baby. Don’t ask me why or how – just know this – it exists.

Filipino time is a mysterious phenomenon where everything in the Philippines is notoriously late. At first, it irritated me, then over time, nope, it still irritated me. This is not to say everyone and everything will be late, but just be prepared. 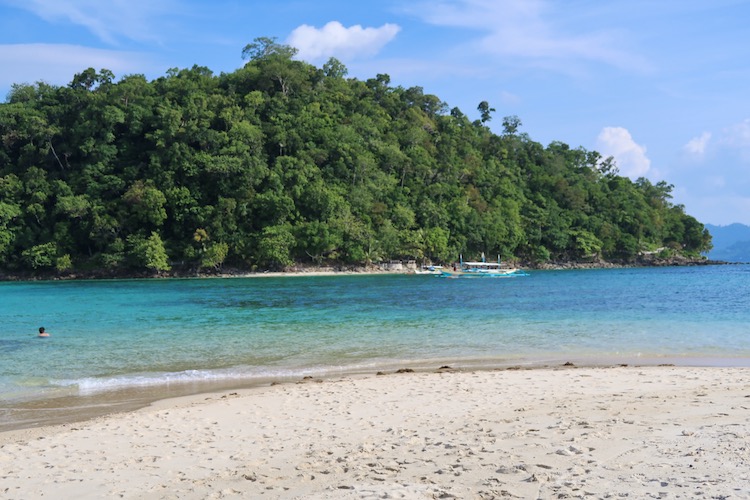 Transport in the Philippines: Flights

When you’re pressed for time flying from one destination to another really is the only way to go. That is unless you are flying in the Philippines. Never in my life have I been somewhere where the flights are so erratic. Almost every single flight, across numerous airlines, was either delayed or cancelled. My friends even missed their flight back to the UK because of this and were asked to cough up £800 to reschedule!

If you need to fly in the Philippines book as far in advance as your plan will allow. Though flights are generally inexpensive the cost can often triple in a matter of days. Additionally, bare in mind that there may be a delay so leave an additional three-hour window if you plan to do anything and an extra day to get to your airport city if you’re flying out of the country altogether. 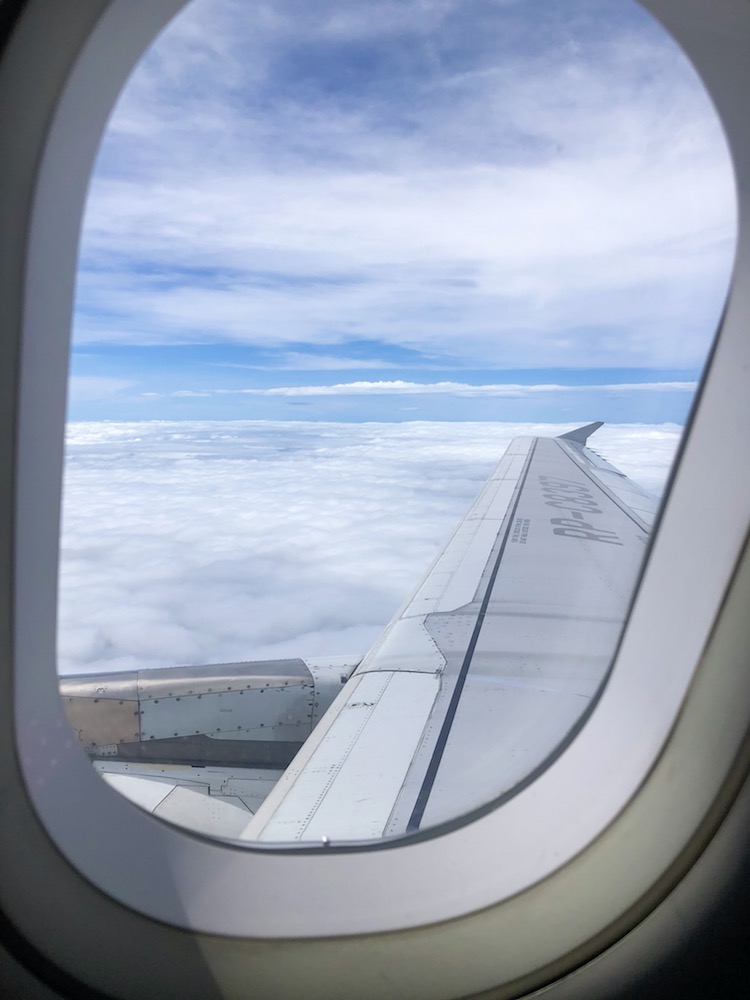 Transport in the Philippines: Grab

Grab is the Asian equivalent of Uber and is a really handy ride-sharing app. They regularly have discount codes and offer ridiculously cheap transport within cities. You can also collect points and use these as credit towards future rides, which is convenient for when the funds begin to run low. Every peso counts.

Transport in the Philippines: Tricycles

Similar to a Tuk Tuk these motorbike taxis will probably be your main mode of transport for island travelling. Prices vary from island to island so ask a local how much your journey should cost as otherwise, you might end up overpaying. 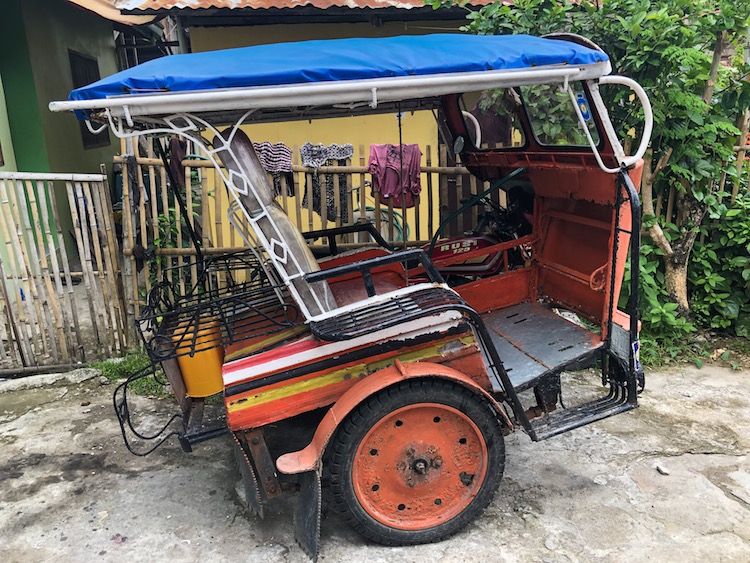 Transport in the Philippines: Motorcycles

A fun cheap way to travel around is by motorbike. Or as the Filipinos call it “habal habal”, which I’m told roughly translates to doggy style *ahem*. I’ve found riding on the back of a motorbike to be one of the cheapest ways to get around. But it’s also one of these situations where you need to be really confident in bargaining. Again people WILL try to overcharge you as a foreigner. Whatever the first offer is assume the real price is at least half of that and be very firm. Start to walk away if they won’t meet you in the middle.

If you can’t be bothered or don’t feel confident with bargaining decide the maximum amount you’re happy to pay before you approach someone for a ride, then although you may pay more at least you’ve already set your own bar.

As with many countries in South East Asia, it’s also possible to rent your own motorbike which can be handy if you want to have the freedom to explore an island at your own pace. Most accommodations will be able to point you in the direction of a reputable rental and will help you out with prices so you don’t get ripped off! 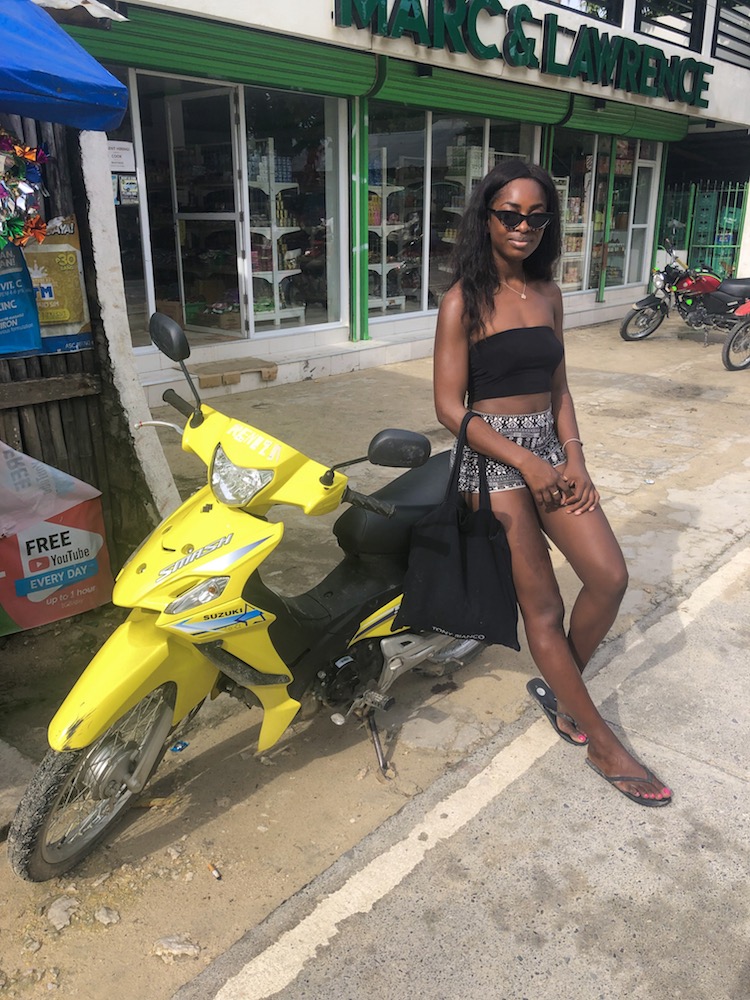 Transport in the Philippines: Local Buses

Travelling by bus in the Phillippines is one of the best ways to cover long distances. The great thing about local buses is they have a set price and as the conductor goes around collecting fares they can hardly increase the price when they get to you just for being a foreigner.

When it comes to local buses there are two options: aircon or no aircon. If you’d rather not be drenched in dust and sweat always opt for the aircon option. Trust me it’s worth the minimal amount to upgrade. 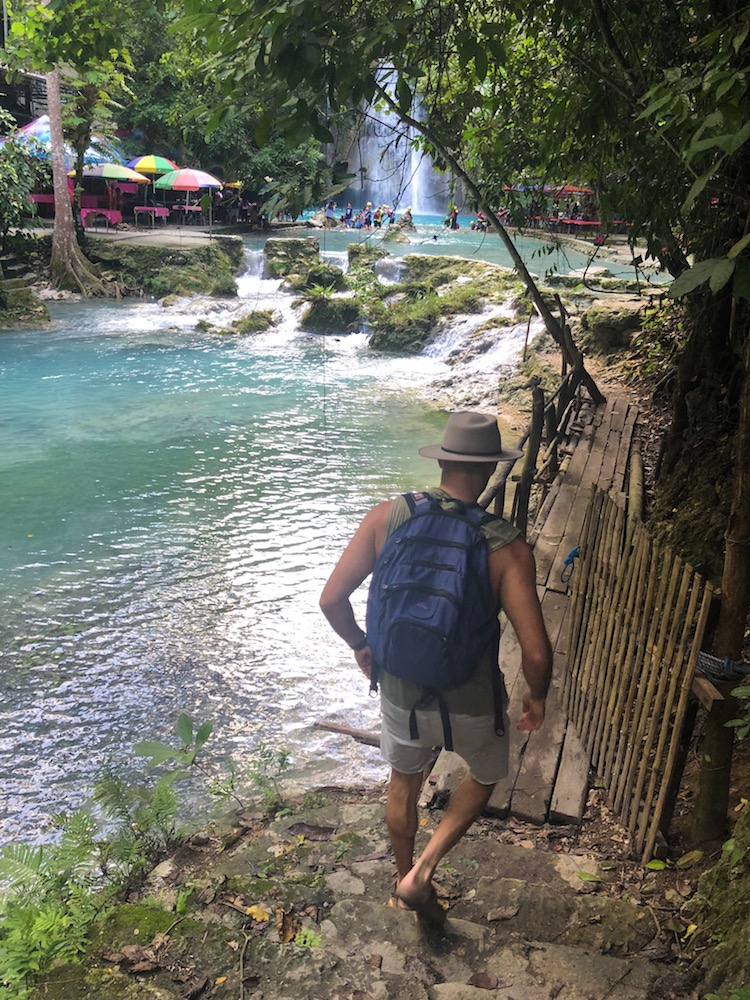 Transport in the Philippines: Jeepney

Another mode of transport that is popular among the locals is the jeepney. These are jeep style cars that look similar to pick up trucks can sit up to 20 riders at a time.

To ride a jeepney simply stand on the side of the road and hail one down as with a normal taxi. Remember to say where you’d like to go an agree on a price before you go anywhere!

Transport in the Philippines: Boats

Some of the best sights in the Philippines can only be seen by boat, so it’s inevitable that at some point you will take to the seas. The waters can be choppy so if you’re prone to sickness pack an ample supply of medication. Travelling by boat was one of my favourite ways to get around as it just felt so… free.

When it comes to organising boat tours and ferries you’ll want to shop around for the best deal. If it’s possible go down to the harbour and speak to the boat owners directly as they won’t have the extra fees added on by tour organisations. 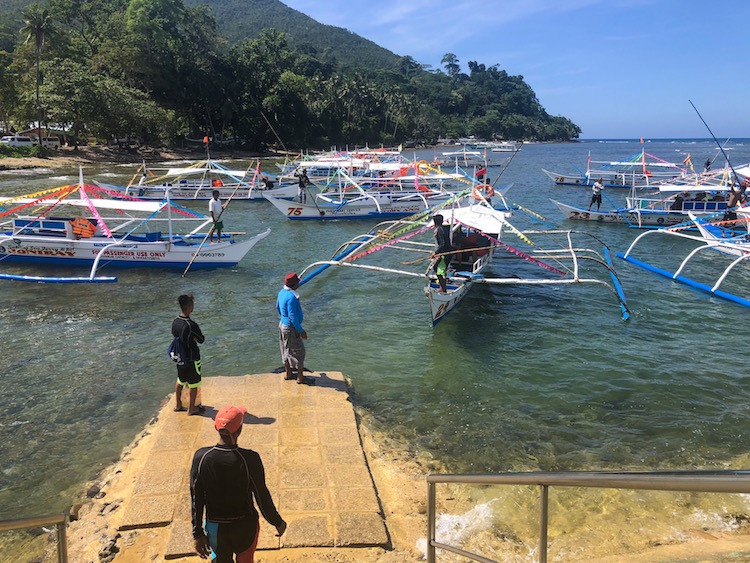 How to avoid getting scammed

People will try to scam you. It simply can’t be avoided.   But if you do your research (like you’re doing now) you’ll be in good stead to protect yourself against being ripped off.

Here are some extra tips to keep in mind –

Make sure your taxi is metered or if possible get a Grab because the price is already predetermined and considerably cheaper than taxis. If the driver tries to make an excuse about not having a meter get out!

Get a local sim

It’s worth having a local sim card as if you’re unsure about something you can just Google and check whether the price is reasonable.

When you’re travelling alone it can be a bit harder to stand up for yourself. Please, don’t let people intimidate or take advantage of you. Something I did to try and give myself a bit more authority was to say a local had told me that the cost was X amount and that this wasn’t my first trip so I knew how much things should cost. Incidentally, it was my first visit, but hey no one else needs to know that!

Once I got a minivan and the driver tried to charge me an extra ticket FOR MY BAG. I was so livid I threatened to get off. It wasn’t worth the hassle for them to replace me so I was charged a regular ticket.

Another time someone tried to scare me into taking a lesser quality van. They said wouldn’t be able to get another ride for five hours and I’d be stranded. I clarified with the ticket vendor who told me there would be another bus in ten minutes.

When in doubt fact check where possible and…. Stand. Your. Ground. 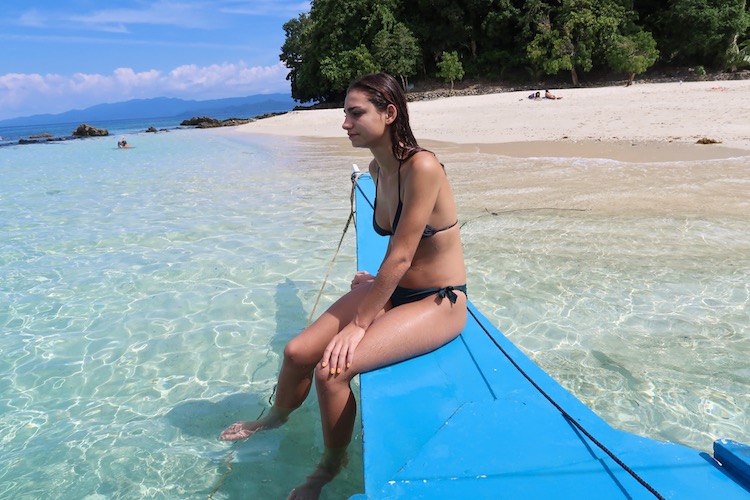 Where to stay in the Phillippines

If you’re in the beginning stages of planning your trip I highly recommend using Booking.com to help you choose your accommodation. It’s the number one platform I use to book rooms around the world. And it’s super handy in the Phillippines it lists a lot of properties that aren’t shown elsewhere. Plus you can use this link to get £15 off of your first stay!

When booking accommodation I also always use the free browser plugin Honey, which automatically adds any working discount codes to your basket AND gives you cashback across thousands of online retailers including Booking.com, which you can cash out for store gift cards.

I WISH I’d had a blog post like this to read up on before I went to the Philippines so you’re already ten steps ahead of where I was.

Remember even if you do fall victim to a scam it happens to the best of us. If nothing else, you can bet the experience will be character building and a valuable lesson in being an assertive traveller who won’t take any shit.

Are you planning on travelling in the Philippines? Do you have any more questions about local transport? 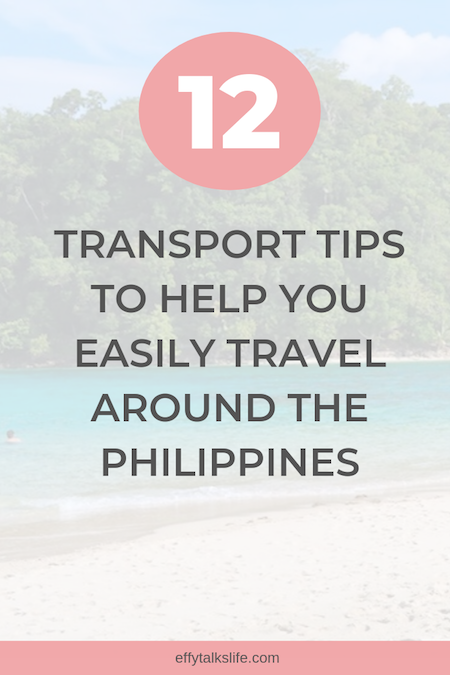