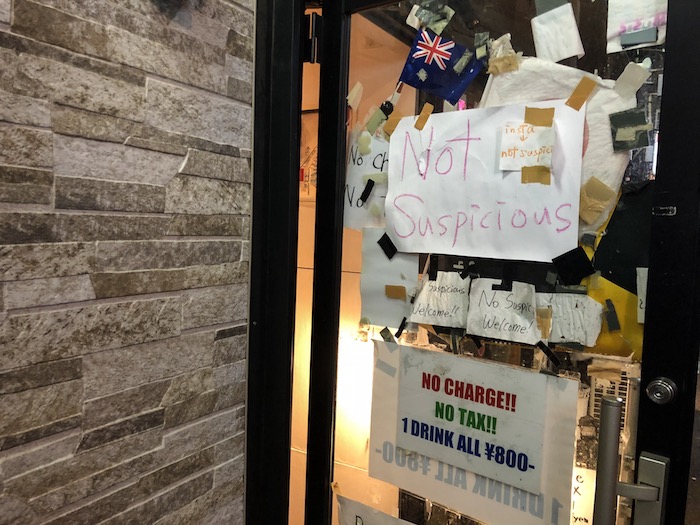 Throughout my 25 years roaming this planet, I’ve been to my fair share of watering holes and alcohol establishments.

However, my recent trip to Japan saw me stumbling across Not Suspicious Bar – one of the coolest spots I’ve ever been to tucked away in Tokyo’s infamous Golden Gai.

Now for context, the Golden Gai area is home to six small back alleys hidden away from the hustle and bustle of Shinjuku. A bit like stepping through the wardrobe in a C.S Lewis tale. Navigating through these Japanese alleyways was like stepping into a different world, a different time. The alleys are lined with almost two hundred bars, which seat on average about twelve people.

After world war two and the great earthquake of 1923 many of Japan’s buildings were destroyed. In the 1960’s Japan experienced a period of modernisation as a result of the economic boom turning many buildings into skyscrapers. Despite this Golden Gai remained. A little piece of history, preserved and tucked away behind the skyscrapers

Many of the bars are themed (hospital, rock and roll), others just rely on their rustic charm. Over the years the bars once a spot for locals to unwind have become extremely popular among tourists. As a result, many bars are not very tourist friendly and feature huge signs saying no foreigners or no English menu. Those that do allow tourists often charge a ‘cover charge’, which is a fee just to enter the bar. Once inside the drinks are not cheap either.

In a last ditch effort to make some friends on my last night in Tokyo I decided to take a wander down to the Golden Gai area and see it first hand. I’m also a sucker for a theme so yeah,  I was pretty excited. The first bar I decided to visit struck me because of red furry walls lining the corridor. On large signs outside it said foreigners were welcome and I knew I wouldn’t be out of place (many of the bars are only open to locals).

Ascending up the stairway into the bar I soon discovered despite being a relatively large bar for the area, the only occupants were myself and the bartender. Feeling too awkward to leave I sat sipping my overpriced Margarita for an hour before I decided it was probably time to head back to the hostel and pack my bags like a responsible adult person.

As I walked back down the alley towards the station something stopped me in my tracks. Number 1. Laughter and a lot of it coming from a second storey window. At this point, I’d gone nearly a day without a full conversation or opportunity to share a dad joke. I needed my fix. Number 2. A strange array of signs made out of paper with the words ‘Not Suspicious’ scrawled over them in various sizes and variations. For something that was supposedly not suspicious – this seemed extremely suspect. Yet my spidey senses were not tingling.

Whirling around I looked up the stairwell and saw a smiling bald man with glasses beckoning me up the stairs. Again feeling too awkward to say no and slightly intrigued, I followed him.

It seems by this point in my travels, my concept of stranger danger has well and truly gone out the window. Although I later found out he was the owner of the bar/Japanese monk.

Climbing the stairs the mysterious paper signs continued in their hundreds. This was certainly like no other bar I’d been to. 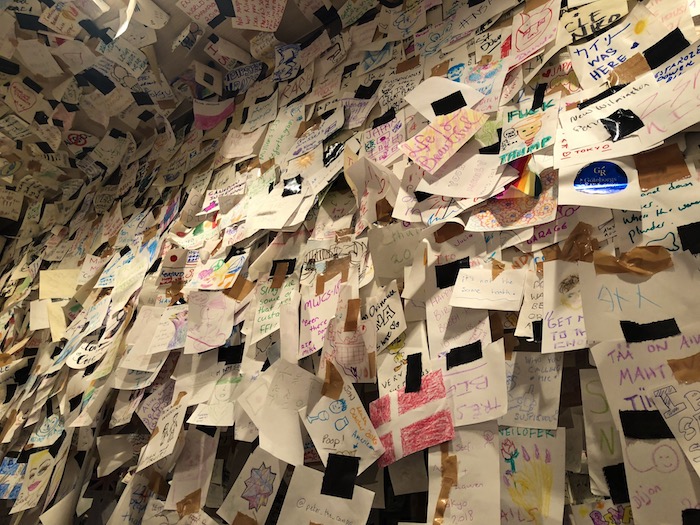 Finally reaching the bar there were a group of strangers laughing and welcoming me in. A Filipino couple. An American couple. A Japanese man. An Australian man. And me. We were quite the bunch. Though distinctly different in age and occupation we found ourselves bonding like old friends.

Around the bar just as I’d seen throughout the Golden Gai couldn’t have been more than 8 seats. When asked how many the bar could hold Mr Suspicious (yup, really!) told us 24. This was later put to the test when new arrivals came and tucked themselves in behind the bar, next to Mr Suspicious and a mysterious squeaky rubber chicken that he used to lure people up from the street.

Even though the bar itself was tiny, it oozed with character. And as an added bonus unlike some of the other bars around there was no cover charge and drinks were reasonably priced at 800 yen, which equates to $10/£5.50. Mr Suspicious proudly showed us Instagram photos of The Weeknd enjoying the bar from a few months ago. “He sat right there, where you’re sitting”. #claimtofame. 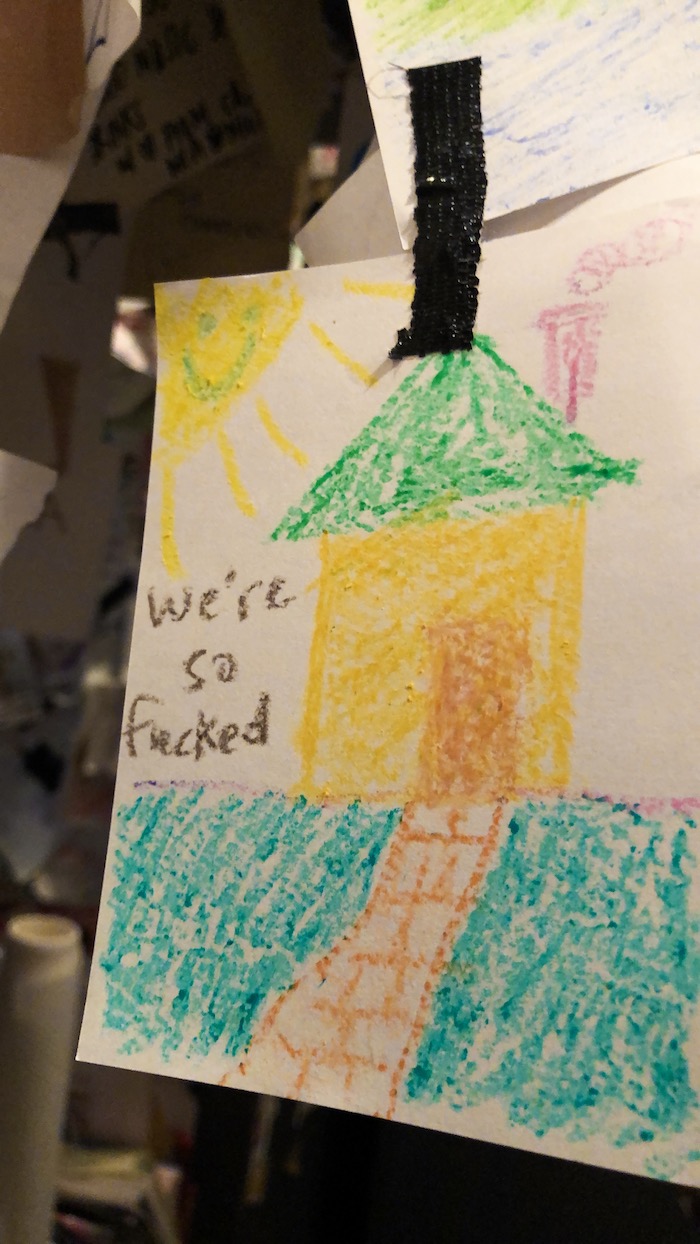 In addition to the baskets of crayons and small pieces of paper on the bar, barely an inch of wall was left uncovered from the hundreds of notes that had been left by previous patrons. Some funny – hundreds of crayon portraits of Mr Suspicious. Some sad “Snape dies on page 658”. And some people just hoping to leave their mark on the world. Be it in the form of their country’s flag or a crayon penis. 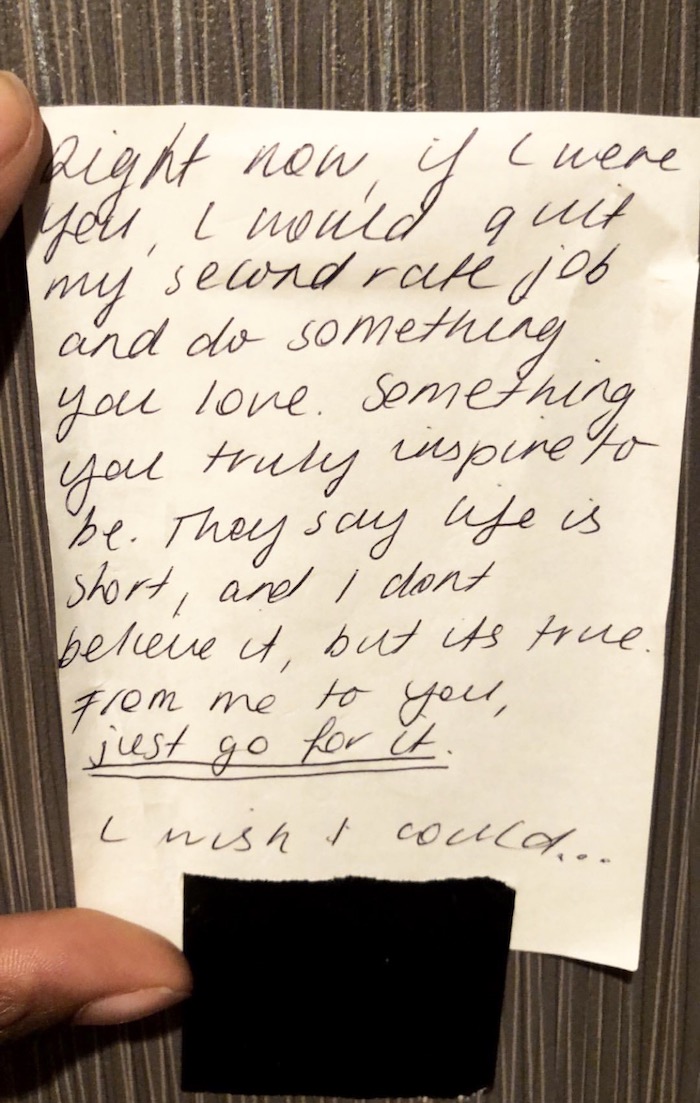 If you’re planning a trip to Tokyo I highly recommend setting aside some time to check out Not Suspicious bar. I had such a great time I seriously considered moving my train a day later just so I could go back.

But alas, we’ll always have Tokyo.

What about you guys? What are your favourite bars around the world? Have you ever been to Golden Gai? 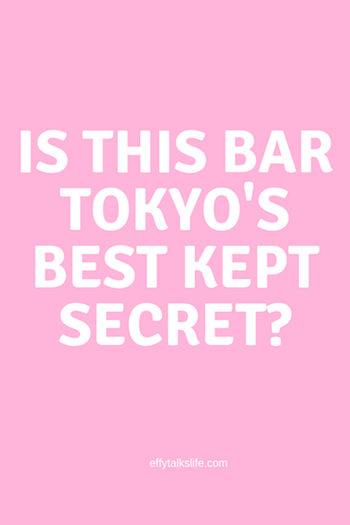