How To Prepare For Your First Japanese Onsen Experience 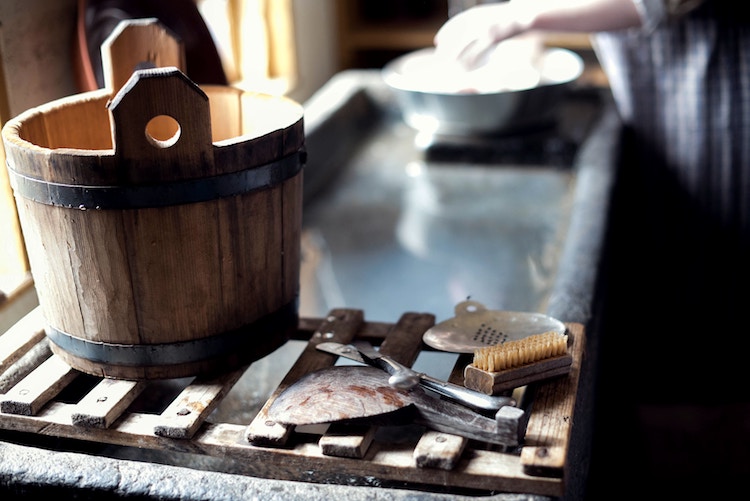 Experiencing an onsen in Japan was by far one of the highlights of my 10-day trip.  After spending my days exploring the cities and getting drunk with locals at my new favourite bar, an escape from the crowds was exactly what I needed. Despite that, I know for many tourists, the idea of going to an onsen can seem pretty daunting.

Curious about what an onsen entails and whether it’s something you’d like to try? Here’s what you need to know.

What is an onsen?

Onsen is the Japanese word for hot spring. These outdoor pools are heated by volcanic activity and can reach temperatures of over 25c! Enriched with natural minerals and peaceful surroundings, they’re a great foray into relaxation and traditional Japanese culture.

In fact, they’re so popular Japan is known as the number one place for hot springs in the world. What makes them different is that unlike Western cultures, here bathers are expected to enjoy onsens completely naked.

Though traditional onsens must be heated by geothermic activity, there are also other pools and hot springs that share a similar concept but are artificially heated.

Why do people use them?

The water is typically packed with minerals.  So one of the main reasons that Japanese people frequent at these hot springs is for their perceived healing properties. Not to mention there’s something incredibly uplifting about just being outside and drinking in the fresh air.

In addition to promoting relaxation, onsens are seen as a great way to socialise and catch up with friends. From my own experience, I noticed that even if people turned up alone they often ended up meeting others there.

Immersing yourself in the local culture is not always comfortable and as tourists, I think it’s important to try things that stretch our boundaries.

Tips for your first onsen experience

So you’ve psyched yourself up. Now you’re ready to go experience a Japanese onsen and soak up all those minerals and good vibes?

But before you go, here are some things you should know:

Traditional onsens don’t allow anyone with visible tattoos to bathe in the springs, as they are a symbol associated with Japanese gangs. This means if you turn up with tattoos on display you will likely be turned away. If you have a small tattoo that can be covered with a plaster. Make sure to do this before you enter to avoid any disappointment.

Clothes aren’t optional so be prepared to strip off. It’s totally normal to feel a little nervous or even intimidated, to begin with. But it will wear off pretty quickly. In most onsens pools are separated by gender with neither being able to view the other. It’s a safe space.

Clean before entering the onsen

Make sure to clean and rinse any soap from your body before you enter the baths/springs. I’m sure it goes without saying but the baths are there to relax in, not to clean your body in. So uh yeah… don’t be weird. Although you’re given a small modesty towel make sure not to get this in the water.

Most onsens don’t have instructions in English so make sure to research onsen etiquette before you go! Quick hack – If you’re still worried you can also Google reviews of the onsen you’re going to. Typically there will be English instructions in the comments.

As a solo traveller, you’re often afforded these chances to try things that perhaps as a group people would be more reluctant to do. i.e – getting naked and spending the day experiencing an onsen with a bunch of complete strangers. So armed with increasing curiosity and a flyer from my hostel I set off on my adventure.

For my first onsen experience, I decided to go to Spa World. A so-called “spa theme park”, situated in what I’m told is one of the dodgier areas of Osaka. Was I largely tempted by the name, catchy tagline and five-minute proximity to my hostel? Yes.

Arriving at Spa World I was a bit apprehensive as most of the instructions were written in Japanese. But as I’d learned from my past week in Japan – when in doubt copy the locals.

As everyone seemed to be queuing at a vending machine I unquestioningly followed and purchased a ticket for 1,500 yen (£10).

The ticket lasted for TWELVE hours and during that time I was free to use any of the facilities. These include multiple hot springs, a gym, a large pool with waterslides (this is in the communal area so swimsuits are needed), a room with comfy chairs for napping and then also paid facilities like massages and restaurants. So it’s a great activity if you’re exploring Japan on a budget. You then walk through a gate where you’re given a bracelet. This is connected card is connected to should you want to buy anything.

Before going upstairs, I was prompted to lock my shoes away. As with many areas in Japanese culture, bringing shoes into sacred spaces is seen as dirty and frowned upon. Leaving my worldly belongings behind I headed to the Asia level to get changed.

As I mentioned before all hot spring areas are separated by gender. In Spa World, they take this a step further by separating their floors by gender. When I visited the Asia themed floor was for women, while the male floor was Europe themed. Each month they rotate so if you’re an avid onsen groupie you can experience each theme. Score.

From a brief scan of the locker room, I could see that most women were already naked. There were no lingering stares, just women going about their lives. Although it was a little nerve-wracking, It was far too late to turn back. So I took a deep breath, dumped my stuff in the locker and proceeded to join the unclothed masses.

Though I say unclothed, we were all given small towels (more flannel sized), which most of the women wore on their heads. I’m told the flannel is to provide a small, and I mean smaaaaalll, amount of modesty if needed.

After walking through a communal shower I had finally made it to Spa World’s Asia. 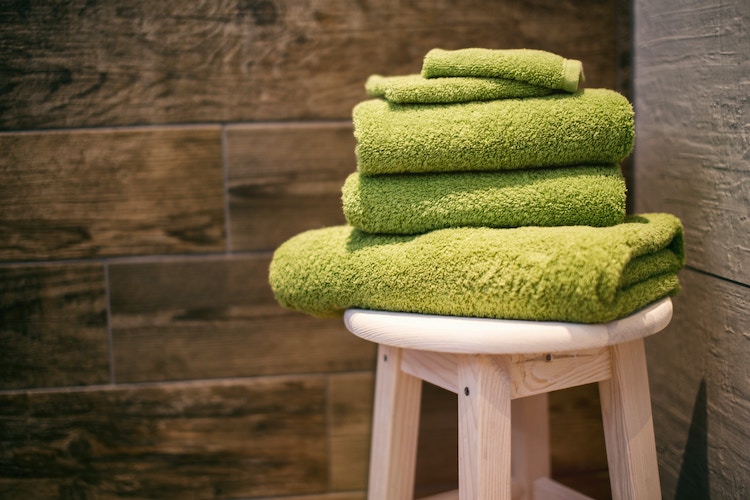 I was pretty lucky I went in the afternoon on a weekday so it wasn’t that busy. There was a very relaxing vibe and loads of different spas to choose from. In addition to several indoor and outdoor hot springs, there were also steam rooms, a salt sauna, two dry heat saunas at different temperatures, a mudroom and a cafe. Without a phone to turn to you’re forced to be in the present moment and you spend the day in this delicious meditative state #dreamy.

I sat laughing at the situation as I sat in the cafe sipping my rum and coke, with towel/flannel in tow. I truly couldn’t imagine something similar in Scotland. It’s kind of sad because our bodies are nothing to be ashamed of yet the older we grow the more self-conscious we become.

Remember as a kid and you’d have baths with your friends or your siblings? Why as an adult shouldn’t you experience the same joy? Minus rubber ducks and mermaid foam bubbles.

In total I spent around four-five hours in Spa World, bouncing between springs and trying to understand Japanese sitcoms. Before heading out into the real world you’re given these super cute – if not a little 1984esque – pyjamas and nighties to walk around the communal complex in. So yes, I indulged and had an incredible (maybe slightly tipsy) foot massage and some ice cream dots. At that moment I was truly living my best life.

Would I visit a Japanese onsen again?

When I go back to Japan it’s definitely something I’d like to try again in a more traditional setting.

If the idea of experiencing a Japanese onsen makes you feel a little bit uncomfortable then it sounds like you may be exactly the kind of woman who needs to go the most. Once you’ve been in there five minutes you begin to forget what it was like to experience the world with clothes in the first place.

Black, white, Asian, skinny, fat, short, tall – you’ll be surrounded by body shapes of all sizes and no one gives a fuck. I think it’s one of the most empowering experiences I’ve ever had.

One thing I love about travelling is it gives you permission to be who you want to be. Especially as a solo traveller, I feel like you step into this highly self-assured version of yourself. She knows how to deal with things when they go wrong. She embraces change and covered in sweat and mud she is smiling because today she experienced LIFE.

So I’ll leave you with this. Our little secret. I was scared too.

But I’ve learned you’ll never achieve anything if you spend your life waiting for permission.  Before you know it the opportunity has passed. So whoever that higher version of you is – make the decision today to just let yourself be her.

Now, watch as the magic happens.

Would you like to experience an onsen in Japan? Have you already? 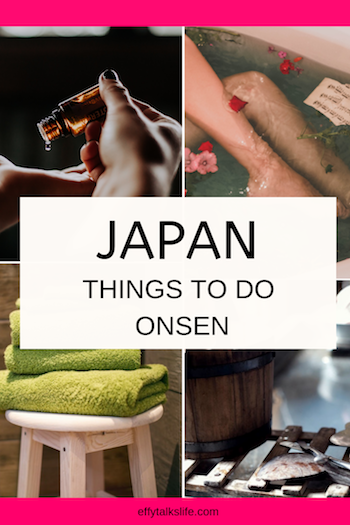 4 Reasons Why You Should Visit The…

5 Mistakes To Avoid As a New…

PREVIOUS POST
"How To Spend A Weekend In Glasgow, Scotland"
NEXT POST
"How to Create a Profitable Online Course"