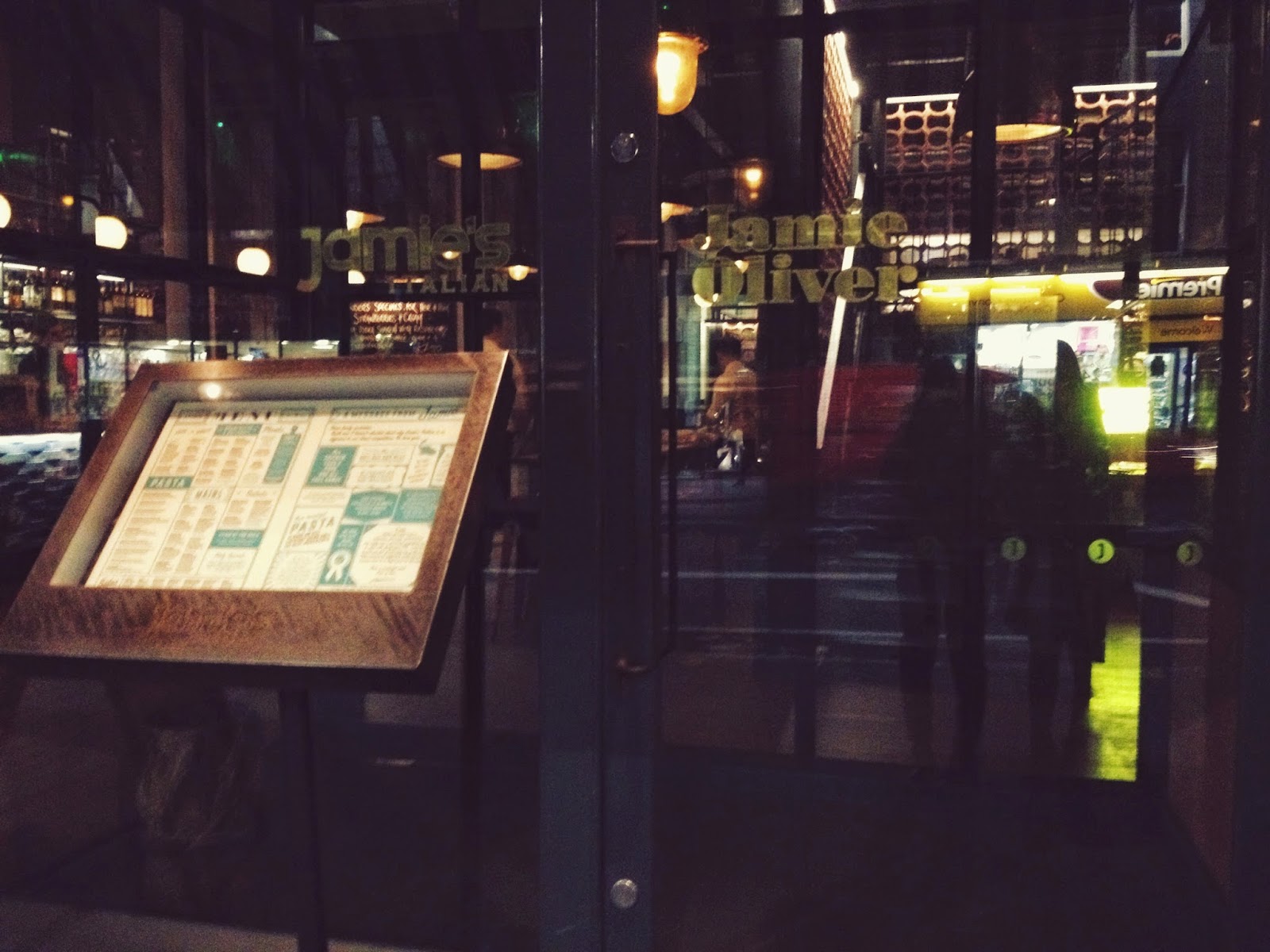 Last week I was invited along to review Jamie’s Italian Aberdeen*.

Jamie’s Italian was founded by Jamie Oliver in 2008 and has since opened in various location across the UK, which includes my own distinctly grey hometown of Aberdeen in 2013. Having heard mixed reviews of the restaurant I really wasn’t sure what to expect, so armed with the biggest pasta critic I know I headed to Jamie’s with an open mind and an empty stomach.

We attempted various photos outside before realising it was far too cold for such shenanigans and admitting defeat we headed inside. Being a Monday evening the restaurant was relatively quiet, which was great for us as it meant we could sit anywhere we wanted. For the two of us we chose a comfy corner booth for four and opted for some Rose wine while we assessed the menu.

Despite having looked over the menu before arriving (I am ridiculously indecisive and cannot be trusted to make on the spot decisions), there was so much choice that it still took us a good fifteen minutes to commit. After a discussion with our waiter who seemed unfazed by my numerous questions/light interrogation we finally decided. Two different bruschettas to start, the Crab and the Ricotta, and for the mains Squid and Mussel Spaghetti Nero and the Famous Prawn Linguine. As the food was being made from fresh the restaurant also accommodated slight changes to our food, which I really appreciated due to my intense phobia of fennel! 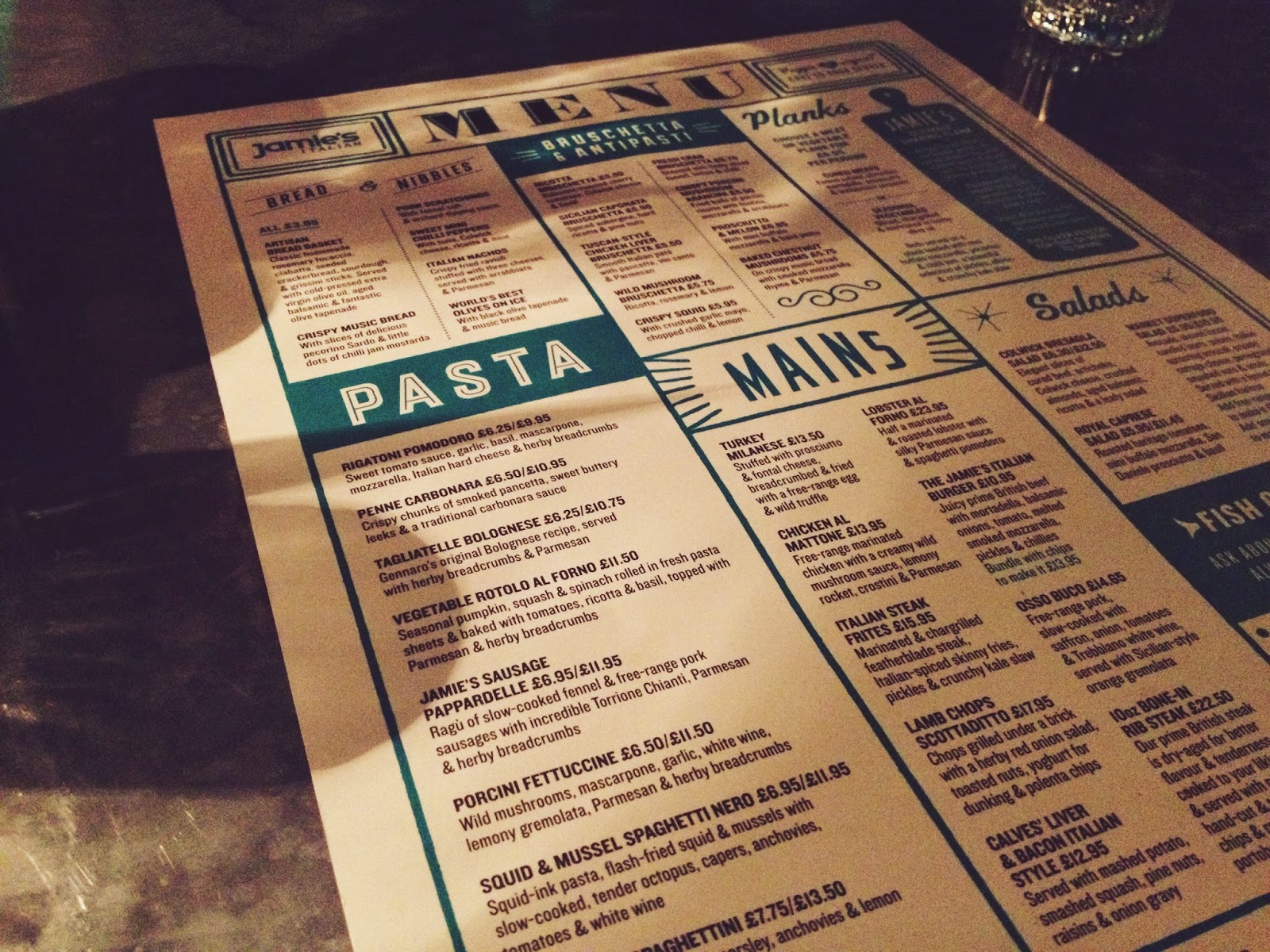 After we placed our order we sipped away on our wine (served in chilled glasses might I add!) and had a chance to take in our surroundings, which I would describe as a contemporary take on authentic Italian. Whilst bread boards and recipe books lined the windows, the rest of the restaurant was decorated with quirky chairs and luminous green.

Following a short wait our starters arrived and we got stuck in. I really enjoyed the twist of spicy crab on a classic Italian dish, but after tasting the Ricotta bruschetta it was love at first bite. A strong, but not overpowering cheese taste. I spent the rest of the course eying it longingly across the table. 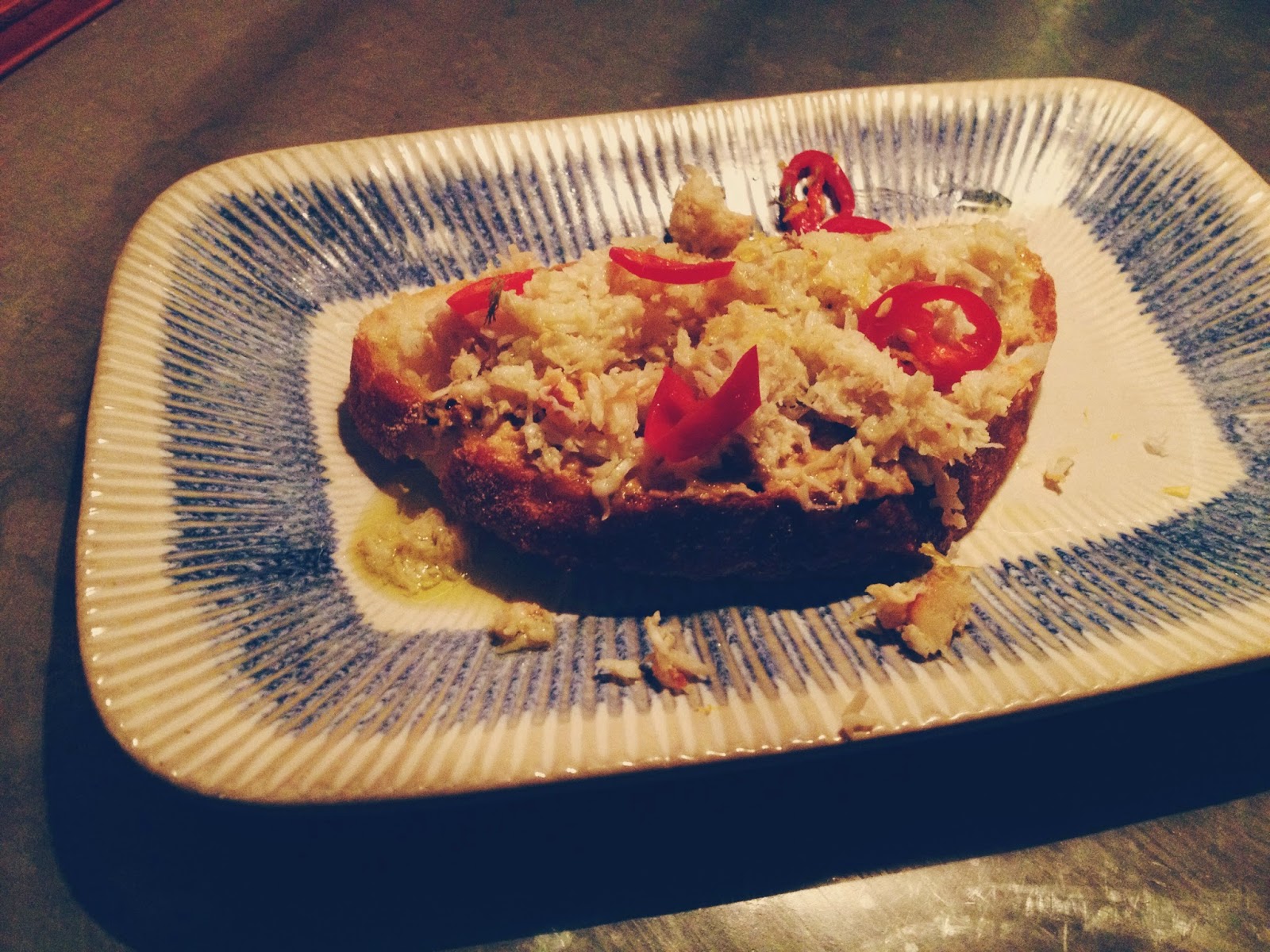 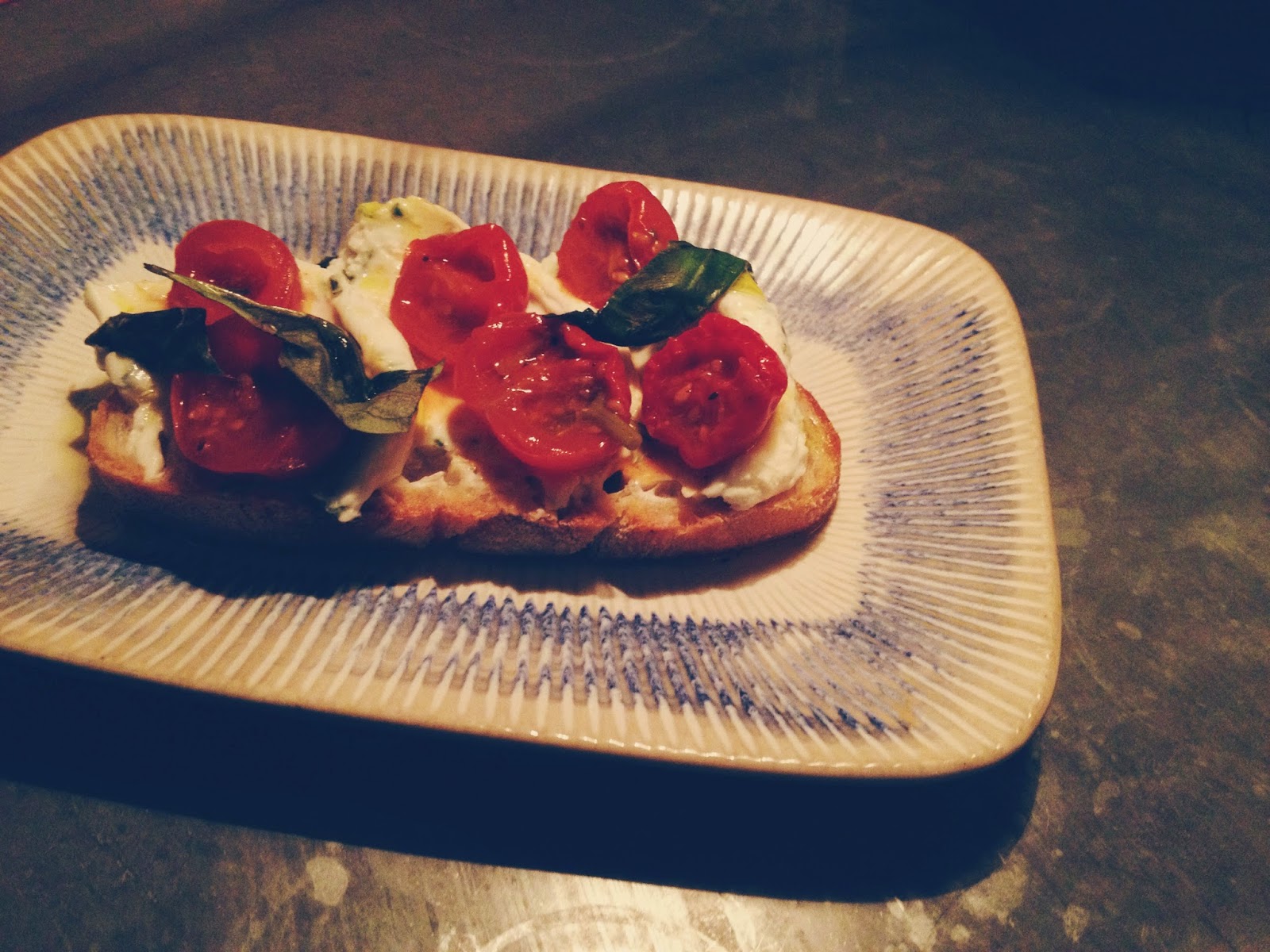 The main event arrived ten minutes later and we both commented on how impressed we were at the waiting times between meals. Anyone who’s had the displeasure of dealing with my emotions when hungry will appreciate this fact all the more.

I have to admit I was a bit wary of the Spaghetti Nero, which coloured by squid ink is slightly scary to look at. However a convincing pitch from our waiter had me sold and what is life without a little scary food every now and again? Upon tasting it there was definitely a distinct seafood taste to the spaghetti, but as a seafood lover I didn’t find this to be overwhelming. The prawn dish was also delicious and was loaded with just the right amount of spicy tomato sauce. Despite my aversion to linguine (I maintain the fact that all pasta does not taste the same no matter the shape) I could see myself ordering that dish in the future. 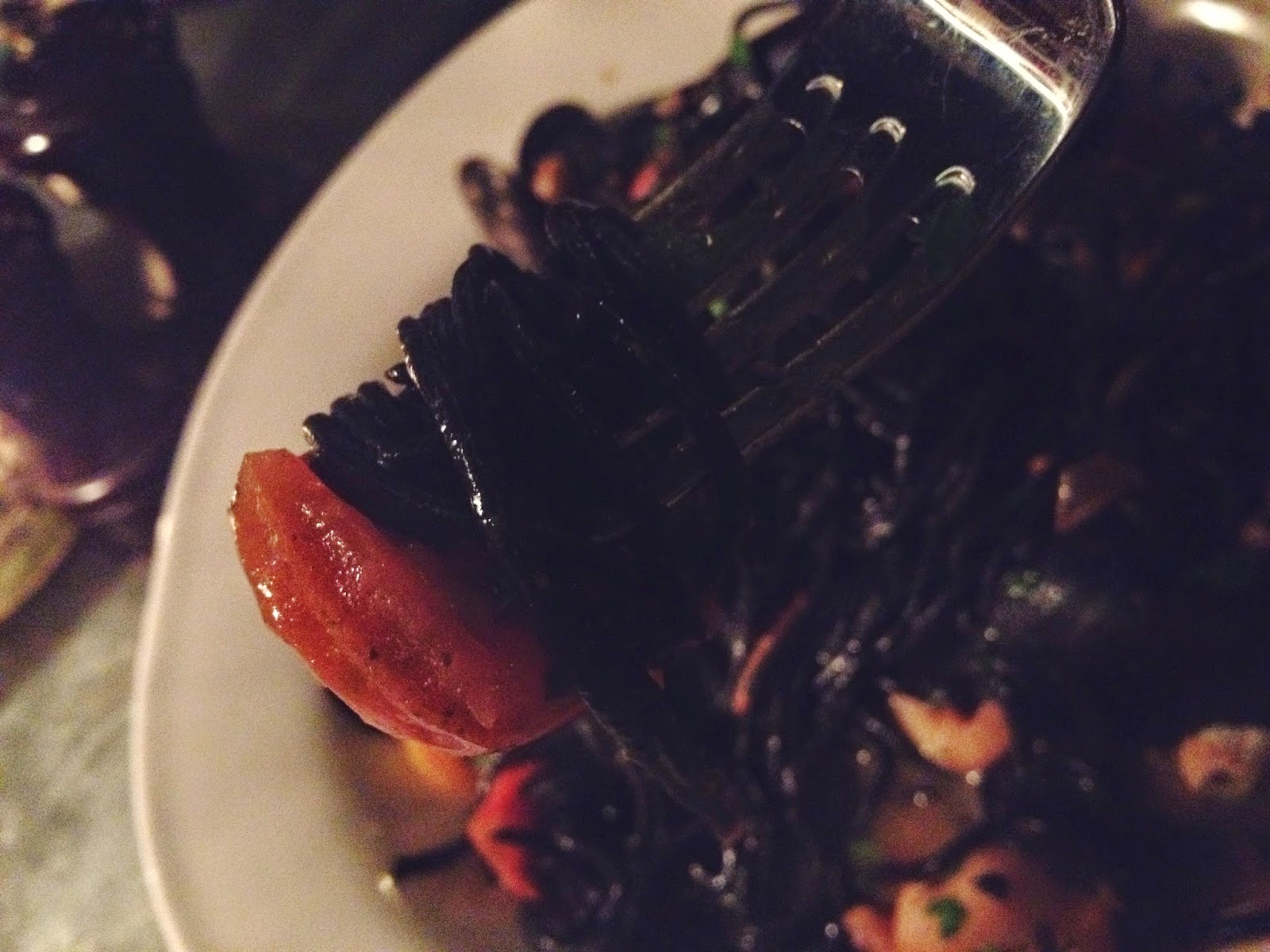 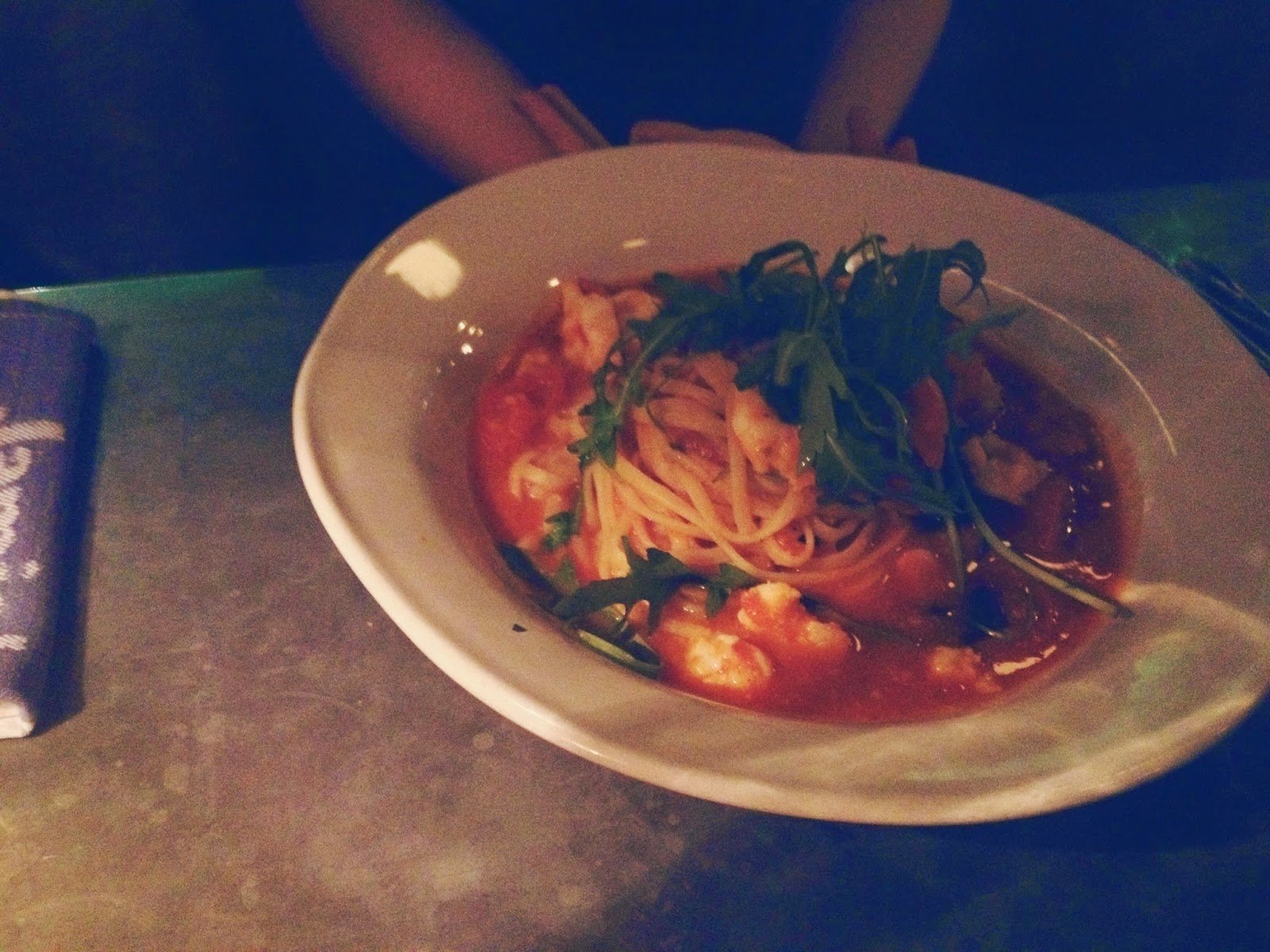 As we were suitably stuffed following our first two courses we finished up with a light dessert. A mixture of assorted ice creams and sorbets drizzled in butterscotch sauce and sprinkled with honeycomb pieces. I still feel a little bit guilty for this indulgence, but at the time it was totally worth it. 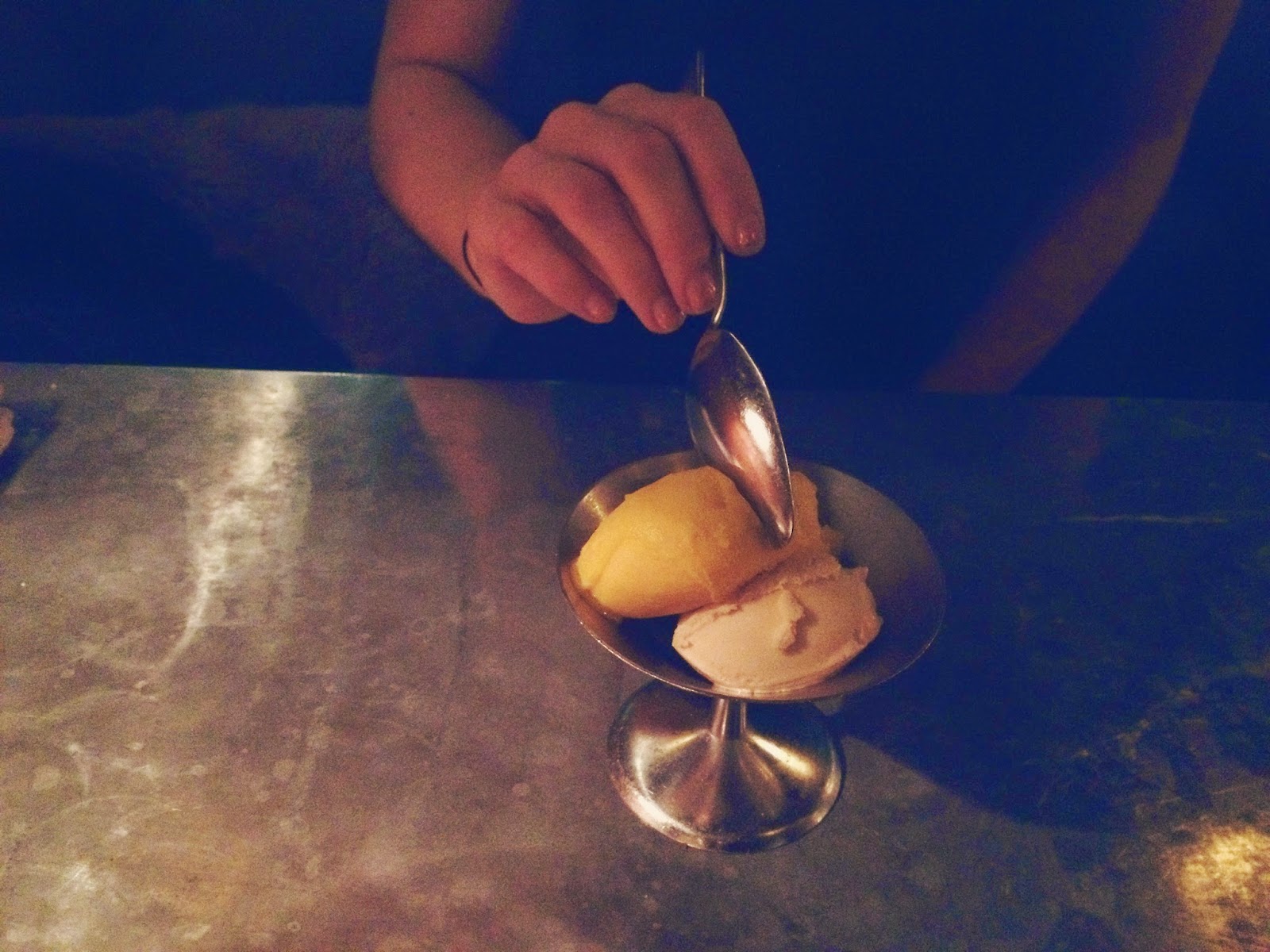 All in we had a great time at Jamie’s and I’d definitely recommend it for a birthday meal or work night out.  There was a great atmosphere and at every stage of the night the staff were friendly and helpful – it truly was brilliant service. The food was tasty and I loved that it wasn’t just the same Italian dishes you could get anywhere. If I had to fault anything it would have to be the lighting, which was a bloggers worst nightmare and consequently I resorted to taking photos of the food under the table lamp. However if you’re not intending on executing a full scale photo shoot of your food this is only a minor issue.

What about you guys? Have you eaten at Jamie’s Italian before? What dishes did you try? Let me know!