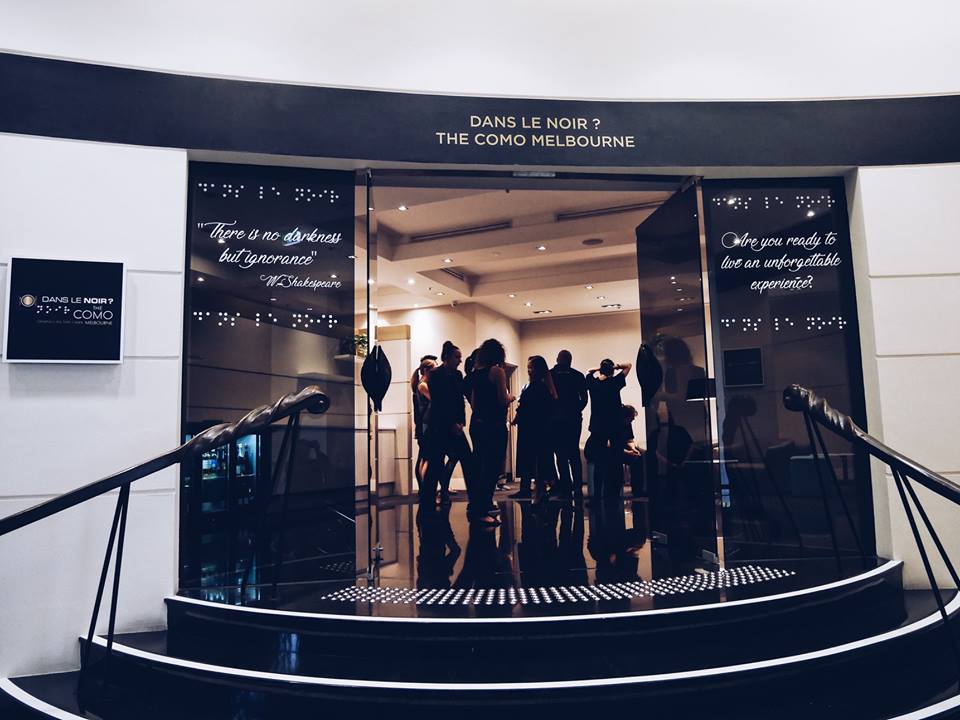 Can you imagine dining in the dark for a full five course meal?

When it comes to food I’m obsessed. I love pushing the boundaries of my comfort zone and enjoying food in new ways. Be it learning to cook in Bali. Devouring a thirty course tasting menu in Barcelona. Or eating a 50p bowl of Pho on the side of a road in Vietnam.

Anything that involves eating and most importantly experiencing food – I’m in.

When I heard the first Dans le Noir dining in the dark experience was coming to Melbourne I just knew I had to try it. Out of pure curiosity if nothing else.

Dans le Noir? (yes, intentional question mark!) is a concept first started in Paris in 1997 with the help of Paul Guinot, a blind foundation in France. The first restaurant was opened without any investor or charity support, staffed primarily by those with visual impairments. Today, you can find Dans le Noir in major cities around the world.

Hidden away in The Como Melbourne (and I mean hidden – we were 15 minutes late for dinner because we couldn’t find it and I have a terrible sense of direction!) we made our way to the foyer of the restaurant. When you arrive you’re given the choice of a three or five course menu, which can be either meat based, fish based or vegetarian/vegan friendly.

We opted for the five courses ($115) on the meat based menu with five surprise complimentary wines ($50). You can also choose surprise mocktails or cocktails or just individual surprise wines. Everything is a surprise until you get in there. Although even then, despite your unabashed confidence, you still have no clue.

When all the diners had arrived we were introduced to Callan our waiter for the night. He assured us we were in safe hands and instructed us all to hold on to the person in front’s shoulders.  That was the last time I ever saw my boyfriend (*cough* for the next hour and a half *cough*).

The dining in the dark experience

I’d done my reading. I read reviews on Facebook, the Dans le Noir? website, Google – you name it (review reading is a favourite past time of mine). But I’m telling you now nothing can prepare you for the eerie darkness of a pitch black room until you’re in it.

You know there’s nothing to look for, still your eyes wildly dart across the room looking for a source of light or a sign of familiarity. After a brief few seconds of realising the reality of what the next couple of hours were going to hold I’m not going to lie there was an “oh, crap!” moment. I’m told that’s totally normal though.

We were seated around a large table alongside the other diners in our session.  Once I found what I hope was my boyfriend’s hand across the table I began to relax. Whatever I was feeling or about to experience he was in it with me too. And, unlike me who’d had weeks to carry out my anxious research, he’d found out moments before we were led into a black abyss by complete strangers. I was adamant about keeping the date a total surprise.

When the shock has worn off you’re left with a newfound appreciation for those who don’t have the choice of dining in the dark one night if they fancy it. For some people – this is their everyday life. Basic things like pouring a glass of water became mammoth tasks, but hey, at least I gave the table a good wash! 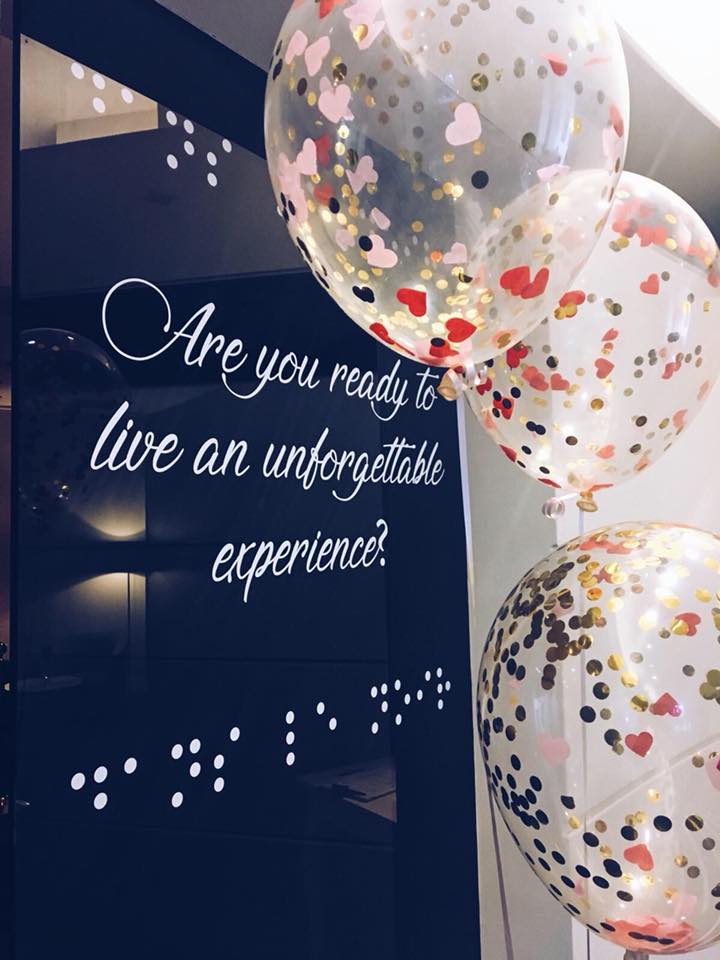 As we’d opted for a five course meal we started our night with an Amuse Bouche. We both confidently agreed we were eating scallops and the dish was easy enough to eat with no sight. As the night went on it became harder and harder to distinguish what we were eating. Hearing other diners guess what they’re eating throws you off. Your own mind begins to play tricks on you. Sight is such a huge part of taste. You don’t realise that until you’re inspecting the texture of lentils between your fingertips wondering how you’ve ended up reverting back to childhood eating habits in a restaurant full of people.

A big indicator of what we were eating were the wines that accompanied the dish. We knew red meant dark meat. White meant light meat or fish. Other than that we just tried to take your best guesses based on existing food knowledge.

I was pretty proud that despite the fact I couldn’t see I’d managed to eat everything with my fork. That being said someone did find a chunk of meat on the table (whoops… no idea how that got there…). On the other hand, my boyfriend decided to forgo cutlery and when one of the poor servers came to collect our empty plates she got an unexpected palmful of all the past 5 dishes.

When we’d finally finished eating and it was time to leave I was surprised to find my eyes had adjusted to our new way of life. I was glad to be going back into the light all the same though. We were all gathered around and given a chance to guess what we’d eaten and drunk throughout the evening. Before all was finally revealed. I’d say we got about 75% right though there were definitely a few curve balls!

The experience of dining in the dark was like nothing I’ve ever done before. The servers and all the staff were incredibly knowledgeable and friendly. I was amazed to discover that over half the people that worked there were visually impaired. It was truly humbling to have been able to share a little bit of their world in addition to trying food I would have normally ordered I wouldn’t have normally ordered. Most of all I was grateful for the chance to try something new and lose our inhibitions, even if only for a couple of hours.

What about you guys? Where have you eaten that has been an interesting experience? Where would you recommend eating where you live? Let me know!