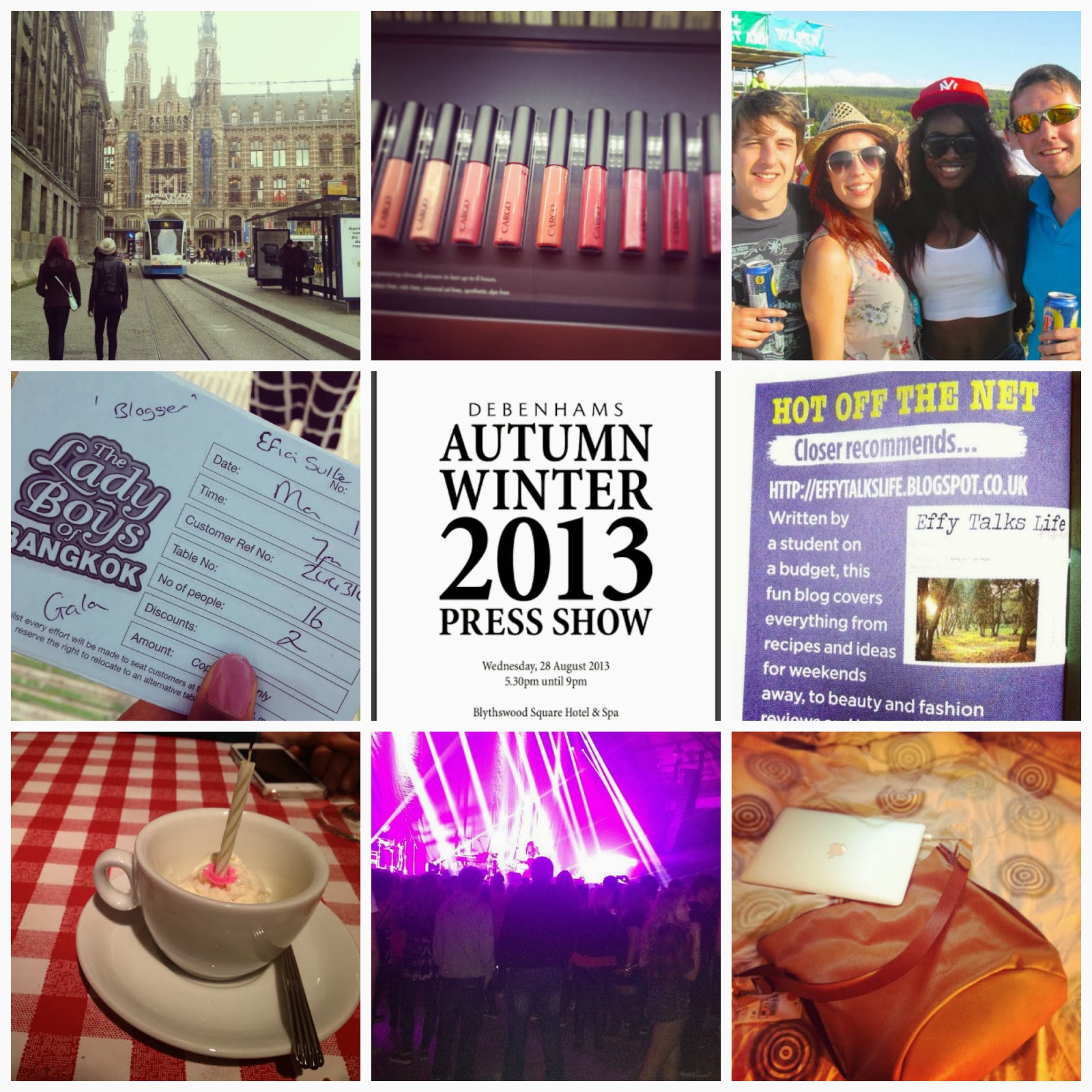 I know it’s a bit late for the nostalgic 2013 posts, but what the hell it’s still January so I’m doing one anyway! Last year was a big year for me so much happened with work, blogging and life in general and honestly it still seems like just yesterday…

I returned from a wild week spent in London/Amsterdam and dived straight into studying for my only exam of the semester. I also officially broke up with my boyfriend of just over a year. January was very hectic!

In February I successfully gave blood for the first time. I’d previously tried when I was at school but had a new piercing so wasn’t allowed to give blood incase of infection! It was both traumatic and rewarding but I’m so glad I did it.

March was a month for meeting people. I met the North East blogger girlies for the first time at the Sara Hill Blogger Event (my first blogger event in Aberdeen) and I also met my now flatmate through my bar waitressing job.

I became one of those people and bought an iPhone. I justified the spend as a blog tool, became obsessed with Instagram and may or may not have FaceTimed my flatmate from the living room.

Deadlines, deadlines. May saw the end of my second year at uni and I attended my first festival of the year. I went to the Cargo Cosmetics Blogger Event and one at Pure Spa too! Additionally, I started working as a ticket promoter and sold Rockness tickets to anyone who would take them from me, and even those wouldn’t.

In June the Rockness ticket pimping paid off and my friend and I gained free entry to the festival. It was an amazing weekend with Ellie Goulding and Steve Aoki being two of my favourite acts. We were  papped by The Daily Mail Online in a photo that proved rather unflattering for my legs and this month my three female flatmates went home for summer and three testosterone filled males moved in.

In July I was offered a job with a great team who paid me to play around on social media all day, and of course I took it! More bloggy things happened too. I was invited to go see The Lady Boys of Bangkok (in Aberdeen) and I attended an Urban Decay event. I spent a lot of July smiling and sipping cocktails – I’d like to think the two weren’t related.

More cocktails, oops. August saw my one year blog anniversary – how time flies! The lovely folks over at Debenhams invited me to their Scottish press show in Glasgow, which was absolutely incredible. I made the decision to move in with Harriet, my darling flatmate, come September and I also became a fully fledged Breaking Bad addict as the last season rolled out –  this was a tearful month.

I moved house, which is always fun (not). My sister returned from some time spent in Australia and together with five other friends we hit Croatia for the first year of Unknown Festival. There was a terrible storm which flooded our campsite and left three out of five tents ruined, we later saw Disclosure perform and everything was instantly made better. Honestly up there with the best moments of my life, they were incredible. In terms of bloggy things the Wire PR girls put on a brilliant day for us North East bloggers at our local shopping centre and my blog was recommended by Closer Magazine can you believe it? I still can’t.

In October I turned 20 and bought myself a beautiful watch as a big girl token, I’ve worn it to all important events since and it’s never failed me yet. Also this month my flatmate and I dabbled with pole dancing (as exercise, not a profession), I was invited to do a photo shoot with my sister and I started back at uni for third year.

I saw two really great gigs. The first was Chase and Status for the third time, I swear they just keep getting better and better and the second was Cyril Hahn. I ended up at a party after and had to walk home in the middle of the afternoon on a sunny day in my massive fur coat from the night before. Oh the shame.

Oh the festive month! I finished uni for Christmas after what felt like a mountain of coursework, I went for a Christmas meal with my course mates and the blogger girlys ON THE SAME DAY and I did my first lingerie review. Most devastatingly, I accidentally destroyed my Macbook which was gifted to me as a ‘well done’ for getting into uni and I’m still pretty gutted about that.

2013 was an exciting year to say the least, and I already have some big things on the horizon for 2014 which I can’t wait to share with you!

What about you guys? What were your best moments of last year and what do you hope to achieve this year?