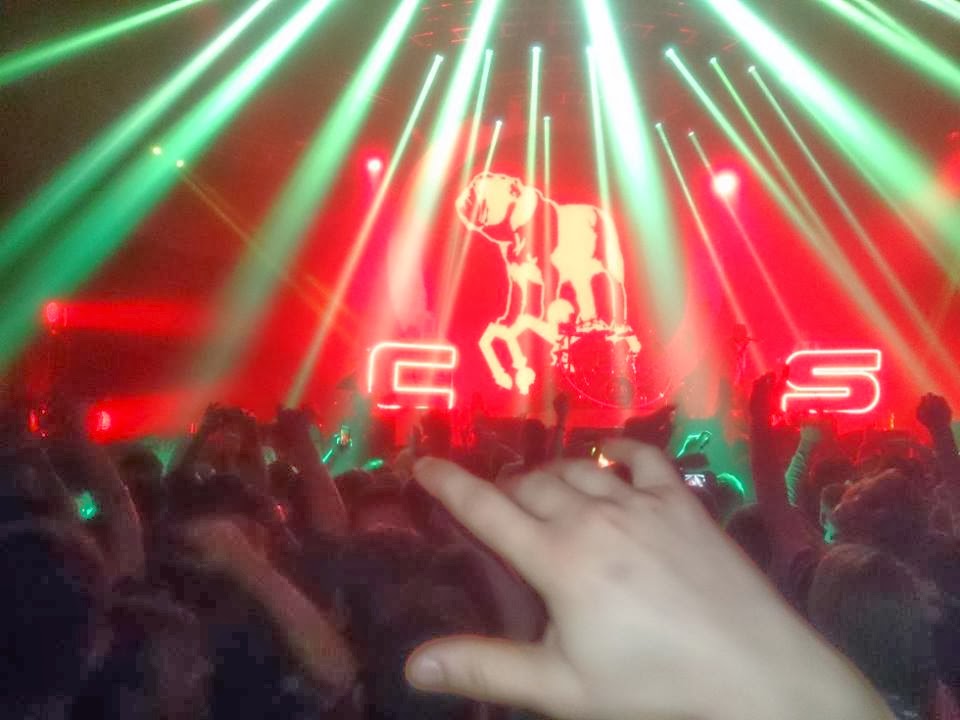 Chase and Status are just one of those acts you can see time and time again and never get bored of. I first saw them a couple of years ago when I was volunteering at Kendal Calling and I can’t even begin to describe it. The atmosphere was like nothing else and the fans are wild.

I remember their set finishing and my friend Ben being down one shoe with no recollection of even losing it. It’s definitely an experience to say the least…

About a month ago I heard Chase and Status were coming to Aberdeen and I made a mental note to myself to get tickets. Flash forward about a month later and I still hadn’t bought a ticket but was surprised with one as a birthday present from my dear *cough* sister.

Being the day after Halloween I was feeling slightly fragile but made it to the AECC in one piece with friends in tow. The first thing I noticed upon walking in is the sheer amount of young people. I’m not talking one or two twelve years olds here, no, I’m talking masses and their parents.

Given that I usually see live music at festivals there’s generally an older vibe so this definitely came as a bit of a shock to the system, especially in my semi-hungover state. If you think adults are wild you should see the tweens. None the less a glass (plastic cup) of rose later I was in a lot better mood and ready for the first support act to begin.

If you haven’t heard of Moko before I suggest you go look her up after this post as she is just incredible. At just 21 her voice packs a tremendous punch and she has one of those vibes that just makes you happy to be around her. We were treated to three of her solo songs before Netsky took over the stage and upped the pace.

Not only did Netsky absolutely smash it but he treated us to one of his brand new songs ‘Without You’ which is available for free download, and yes I have been listening to it on repeat since.

Finally Chase and Status graced the stage (while I was in the little girls room – outrage!) and man they did not disappoint. For that hour you completely forgot you were surrounded by teeny boppers, being hit by all sorts of plastic weapons (cups, weapons same thing…) and drinking cheap wine. Alongside all their most popular songs they also played some tracks off of their newest album and surprisingly Rage Against The Machine – Killing in the Name of. Which I happily danced away to while simultaneously edging away from the mosh pit. Like I said – these kids were brutal.

After the gig we all made a quick run back to my sister’s house to change into some more glamourous clothers before partying the night away VIP style in a local club. Suffice to say the next day I wasn’t feeling 100%, but if I could go back and do it again? I wouldn’t change anything.

What about you guys? What have been your favourite live performances? Have you seen any of the above live? Let me know!