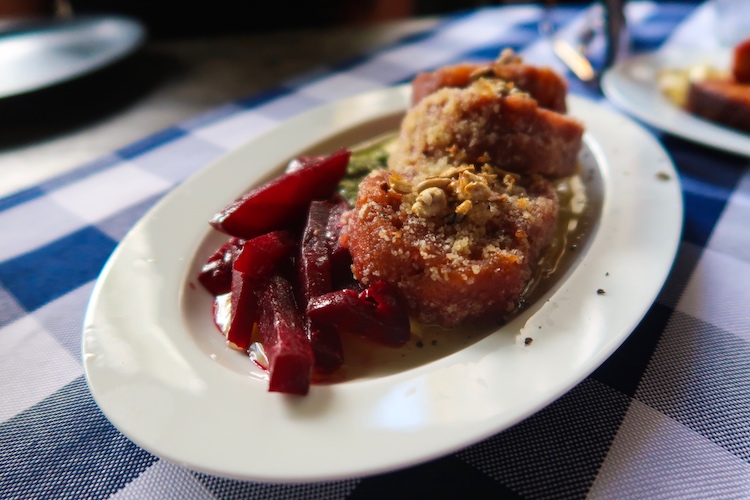 *This post contains affiliate links. This means, at no extra cost to you, if you decide to purchase some of the things mentioned I will earn a small percentage towards my cupcake fund.

One of the top priorities for me when I land in a new city is getting involved in the city’s culture. And, of course, by culture I mean food. If you’re planning a trip to Berlin and have similar culinary aspirations you’re going to want to check out my Berlin Food Guide: 9 Experiences You Can’t Miss!

Helpful tips for eating in Berlin

What is traditional German food?

It wouldn’t be a true Berlin food guide without an insight into the history behind some of the food.

I’m going to be real with you for a moment. When I thought ‘German food’ I really didn’t have any idea what that meant at all. Embarrassingly the only German food I could think of was Bratwurst (traditional german sausage in a roll) that I’d regularly wolfed down at Christmas markets. In an attempt to remedy my lack of German food knowledge I booked on to a Berlin Food Tour by Bike.

Over 3.5 hours you’re taken on a progressive dinner tour of the city in an intimate group setting. Whether you’re new to Berlin or you’ve been a couple of times before I highly recommend giving the food tour a go.

As opposed to just turning up at restaurants and hoping for the best you learn all these incredible anecdotes as to how each item has become a staple in German cuisine. You get to try some delicious german food in Berlin and there are a couple of extra surprises too. I don’t want to spoil it for you so you’ll just have to wait and see for yourself! 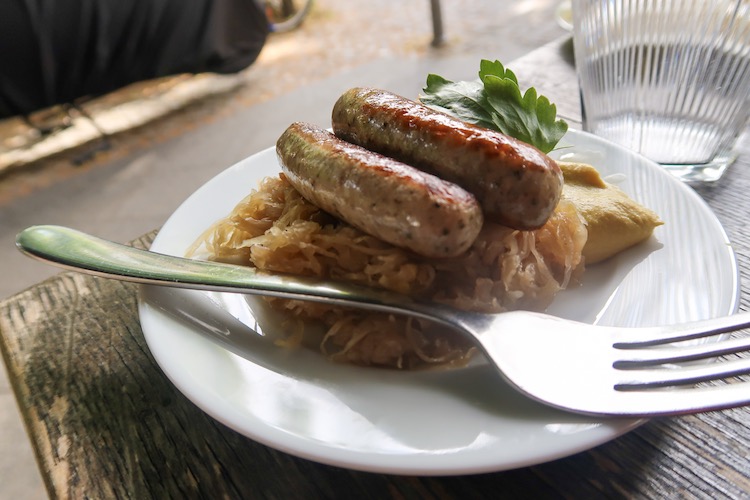 As with most cultures around the world, German food is a melting pot of traditional Bavarian food and influences from other cultures.

One thing you may be surprised to learn is that food in Berlin has a huge Turkish influence. On the food tour, we learnt that West Germany experienced a crippling labour crisis in the 1960s exacerbated by the construction of the Berlin Wall.

Due to the lack of East German immigrants entering the country, West Germany decided to sign a treaty with Turkey to encourage skilled Turkish people to emigrate to Germany. Following the end of their work placement, most of the immigrants decided to continue living in Germany. Now Germany is home to the largest population of Turkish people outside Turkey. As a result of this, you’ll notice the streets of Berlin are lined with kebab shops. 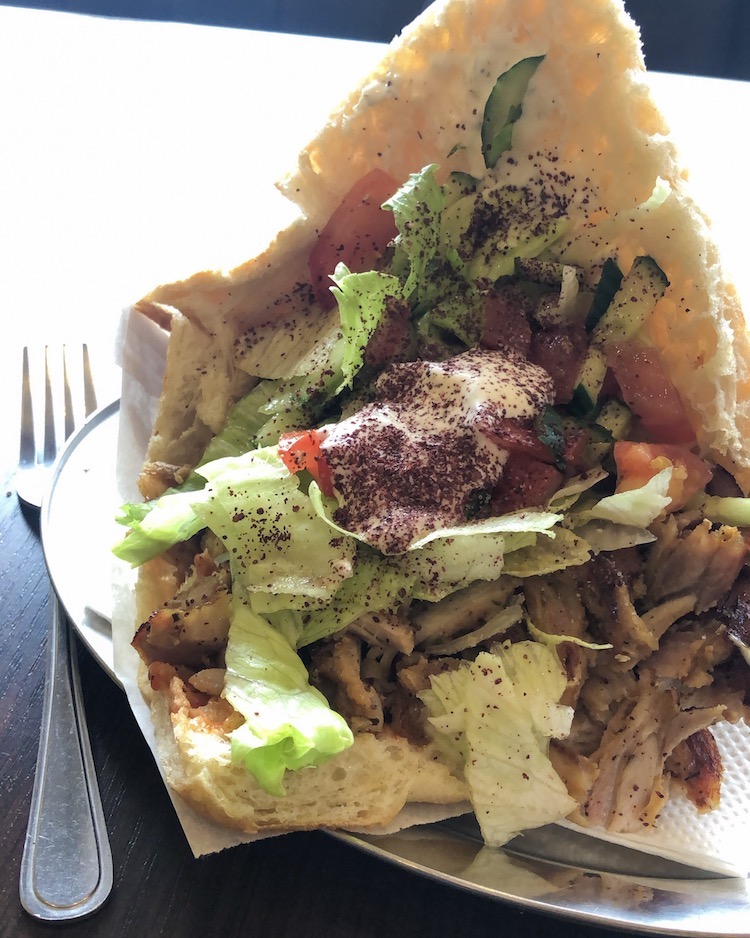 ‘If you want to eat like a local, you should eat a kebab’.

Unlike the greasy 3 am hopefully-this-will-soak-up-those-last-five-tequila-shot kebabs that you may be used to, the kebabs in Berlin are actually pretty damn good. So what better way to kick off my Berlin food guide than with one of the best?

After two recommendations on Instagram, and an insatiable desire for yet another kebab, one day I decided to head to the cult favourite –  Mustafa’s Gemuse Kebap.  Gemuse Kebap literally translates to ‘vegetable kebab’ but there’s also a chicken doner option too. And not just any chicken doner I might add. In between the none descript hunk of rotating meat various vegetables are weaved in alongside herbs for added flavour.

Far from ‘just another kebab’, you can expect your wrap of goodness to be filled with roasted vegetables, potatoes, feta and an assortment of salads. The kebabs are extremely reasonably priced with no option costing more than 5 euro depending which filling you opt for.

Now for the downside, like most city favourites you can expect to queue so timing is everything. I recommend to check Google for the busiest times and plan your trip accordingly.

Once a train station bathroom, Burgermeister is now home to one of the city’s most popular burger joints. Depending on what time of day you visit be prepared for a long wait. But you also get awesome street creds for eating out of what used to be a toilet.

Created by Herta Heuwer in 1949 using ingredients gifted to her by British soldiers the simple ‘Currywurst’ has gained such a big place in German cuisine that there was a WHOLE DAMN MUSEUM dedicated to it. Personally, I’m still undecided on how I feel about Currywurst. But you just can’t go to Berlin without trying it.

So what even is Currywurst you ask?  Well, it’s a German fast food that typically consists of steamed pork sausage coated with curry powder and lashings of ‘special’ ketchup. The ketchup itself normally has additional measures of curry powder and other spices. Often it’s cut up into kiddy sized pieces, which makes it ideal for snack breaks amongst all the sightseeing.

Unlike most vendors at Curry 61, you’ll also find a vegetarian sausage option so fun for all the family. Yay.

Located in Berlin’s Mitte (translates as ‘middle’ i.e – town centre) district, Monsieur Vuong provides quite possibly the best Vietnamese food I’ve had outside of Vietnam. Despite having a small menu, what is on there is done with such flair and precision that you’re left longing for more the moment you’ve finished. I loved the traditional chicken Pho (Vietnamese noodle soup pronounced Fuh). But there are also some great vegetarian options if that’s your jam.

Top tip – don’t sleep on the smoothies they are blended from the heavens themselves.

Have you ever eaten something so good, that you went straight back for round two? That is how I feel about Bratwurst. Though it may not look that different from the humble sausage Bratwurst is so much more than that. The German sausage is typically made with pork (although some also have veal) and a range of herbs including sage and nutmeg.

I like mine with mustard, but they’re really so diverse you can eat them with anything. I recommend getting your fix at Best Worsht in the Mall of Berlin. They have tonnes of options (including vegan) and amazing service to boot.

Dumplings with a difference. If you’re up for experimenting with some interesting flavour combinations you have to get yourself down to Happies. Happies is an Austrian fusion restaurant serving a variety of sweet and savoury dumplings (or sometimes both together).

If you’re anything like me and want to try ALLL the things I recommend getting a few different ones and sharing. Oh, and don’t be afraid to try something different you’ll probably be pleasantly surprised. Probably.

Chances are when you think Berlin your immediate thoughts don’t go to Korean BBQ… but maybe they should. Aside from having an awesome name Kimchee Princess is the place to go for fresh barbecue cooked right at your table.

I’ve always found Korean BBQ and hot pot settings to be great with a group of friends. Where else can you get a socialising experience that actually encourages you to tear your eyes away from your phone and instead to the sizzling pit of fire on your table?

Note: The BBQ is typically is only typically served after 5 pm so if you are after the experience, not just a la carte dishes go at dinner time.

When it comes to giving you a food guide of Berlin I don’t just want to send you to the city’s best cheap eats. I want to give you the all-round EXPERIENCE. After all, for most of us, we’re only there once.

Fine dining has really challenged the way I look at food. Since experiencing my first Michelin star restaurant in Barcelona (Disfrutar) I’ve been longing for a successor. I’m truly gutted I didn’t get to try Coda while I was in Berlin, which is why I have entrusted you dear reader with this epic responsibility.

If you haven’t already dined at a Michelin star restaurant it’s just something you have to do. I’m gonna be real with you – yes it is wildly expensive. However, you’re never just paying for the food. You’re paying for the performance and the chance to try something different.

Coda offers exactly that with an array of deconstructed desserts, where everything isn’t quite as it seems… If you can always go for the alcohol pairings they really do make the dish. To avoid disappointment make sure you check out the opening times in advance as I seem to recall it only being open for half of the week, or maybe even less!

Having made it to the end of this post there’s a good chance you, like me, get excited by the prospect of trying new foods. So if you fancy dining like the locals why not book a food tour of Berlin by bike? On the tour, you get the chance to try an assortment of traditional Bavarian food and some other delicious Berlin favourites. Ah, I still dream about it now… 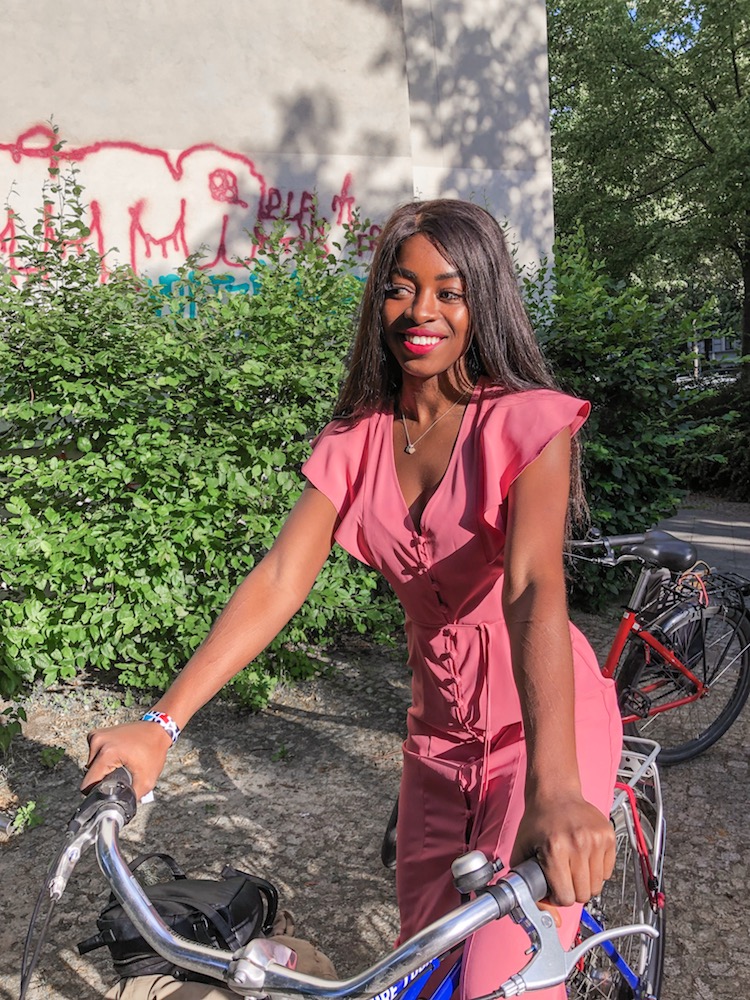 If you’re considering heading to a couple of spots in this post (you should) I’ve made a handy map with all the locations. Please note I cannot be held responsible for any food comas.

When I wasn’t zipping around Berlin on a bike I used a Berlin Welcome Card for unlimited train/tram/bus travel and I highly recommend grabbing one of these. Similar to the London Oyster Card, you insert the ticket into a box at each station and you’re on your way. Also, you get a TONNE of discounts off some of the main attractions even free entry for some spots too!

Full disclosure my card was gifted to me by VisitBerlin. But if you’re a regular fixture around these parts you’ll know that I’m an absolute liability when it comes to city navigation. I cannot explain how much less stressful having the card made the experience.

What about you? Have you been to Berlin before? What spots would make it on to your Berlin food guide? 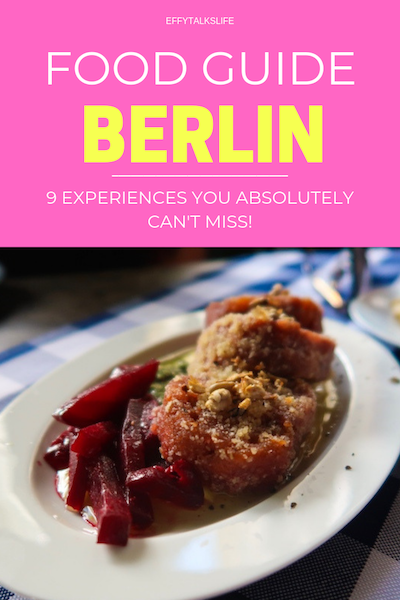