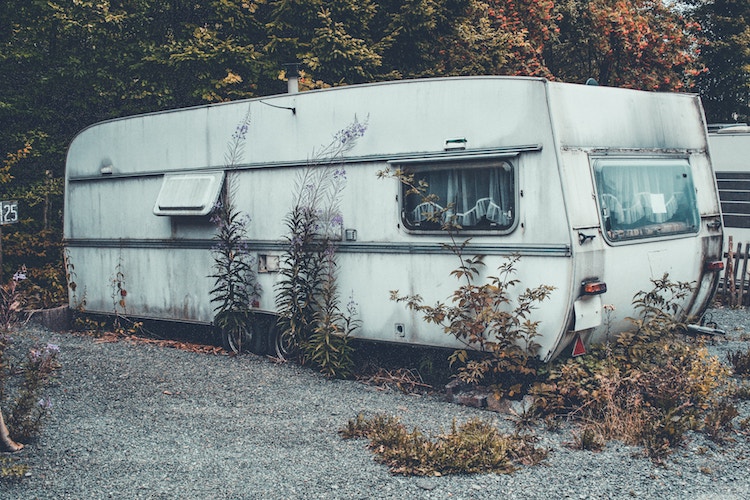 Do you ever look back at a period of your life and think WOW I can’t believe that happened? Or I can’t believe I got to experience that moment? A distant memory that is equal parts surreal and vivid.

Writing about my nightmare Australia farm work experience has taken me over two years – but I promise it’s worth it.

If you want to know what it’s really like to work on a farm in Australia for your second-year visa keep reading to get the inside scoop.

Why work in Australia on a farm?

Before I get ahead of myself let me preface by explaining why someone would give up three months of their life to work in Australia on a farm for minimum wage in the first place.

In 2016 I moved to Australia from the UK on a one year Working Holiday Visa.  But unexpectedly I began to settle more and more into my new life in Melbourne. As the months began to speed past I came to the realisation that I wasn’t quite ready to give up my Australian adventure just yet. And so I was determined to stay by any means possible.

In an effort to staff farm jobs that are largely rejected by Australian citizens, the government came up with a scheme whereby visitors on their first year Working Holiday Visa could be granted a year extension. There was just one small catch – they had to complete 88 days of farm work in rural Australia.

Having heard horror stories of verbally abusive farmers, insects a-plenty and worse I apprehensively set out on a mission to find a farm job. With very little effort on my part and a recommendation from a mutual friend I soon landed a farm job for my second year Working Holiday Visa and was set to start my position a few months later.

I can’t tell you too much about that farm as it transpires the work toes along the lines of acceptable qualifying positions and well… I’m nae a grass as we’d say in Scotland.

But what I can tell you is this…

Arriving at the farm

One flight, one train, one bus and 24 hours later I’d arrived in the small town in New South Wales. The nearest shop was a mile away and it had one pub that closed at 9 pm.  It was July, which meant winter in Australia. As I stepped outside the next morning I felt the cold wind clip my ears and as I exhaled and saw my icy breath float past me.

Entering the office photos of the previous workers covered the walls. As I surveyed the sea of white faces looking for a hint of recognition I realised there would be none. I was the first black person to work there.

There were four of us working on “the farm” for our visas and we lived in caravans on site. As a late arrival, I didn’t have a caravan of my own but rather a small corner of the main caravan I was sharing with a girl we’ll call Lucy. We had no WiFi in said caravans and having only been there a day I was already beginning to feel cut off from the outside world.

Despite this, I still embraced the experience for what it was. I knew it would be challenging, but I clung to the hope that it would pass quickly. Trying to make the best of the situation I laughed to myself at least I wasn’t somewhere in a shed packing fruit for a living… now that would be awful.

Trouble at the farm

Every day we’d wake up at 6 am to start the gruelling 10-hour shifts. Each punctuated by 15-minute lunch breaks in which there was time to wolf down food, kick start indigestion and go back to work. The girls said sometimes they pushed the boat out and extended by an extra 10 minutes. Yes, you’re right in thinking they were wild.

Two days after I arrived on “the farm” I was called in to see the boss. Never a good sign.

“So Efia I just want to get this clear…” She coldly stared at me and I felt the mood in the room instantly shift. “I’m normally right about people. I don’t want to be right about you – but I’m just saying I just… know. The girls have told me you’ve been on your phone.”

This was true but I’d felt isolated by the girls who all already knew each other and would do the work together leaving me excluded. I stood outside on my phone out of awkwardness and not knowing what to do. If you’ve met me in person you’ll know I’m not shy by any means. But the truth is I just didn’t feel welcome.

She continued “I also feel you’re not picking up the work quickly enough.” Baring in mind it had been TWO DAYS. I was pretty taken aback but I desperately wanted the job so smiled, gushed my apologies and told her I’d work harder.

How I got fired

The next day I made point of leaving my phone in the caravan. Then I plastered a smile on my face and worked as quickly as I could. Through it all, I couldn’t shake my feelings of isolation and being ganged up on. But I was so desperate for the visa that I pushed the negative feelings aside and used my freedom as fuel.

Another two days passed and again the boss called me into her office. This time she said she had let me go. There had been reports of me recklessly driving a golf buggy and this was serious misconduct. And to clarify by recklessly she meant accidentally backing into an empty wheelie bin. Sure I could definitely see that was a fireable offence.

She continued that normally girls had to pay for their transport when they went home but as a favour, she’d booked mine. Also, despite the fact that the first four days were normally unpaid she had decided to give me half pay for my time. She didn’t look me in the eyes. Unlike standard jobs with human resource departments, the nature of farm work meant you could get let go in an instant with no formal proceedings.

I got back home (to the caravan) and burst into tears. In just a few months my first year Working Holiday Visa would run out and I was no closer to getting my second year. I was back at square one – in fact even further behind.

Learning the truth about my Australia farm work

The girls were all shocked when I returned and offered to help me get my job back. But when I told my friends and boyfriend what had happened they said something about the situation didn’t seem right. After their encouragement, I decided to go back and ask for a proper explanation.

Choking back the tears I made my way back to the office to speak to my boss. I think some small part of me was ready to fight for my job.  Whatever happened I was determined to understand the REAL reason I’d been let go. So I asked. I felt as though I’d been kicked in the stomach when she plainly told me the girls thought I wasn’t up to the challenge.

They didn’t want me there.

It was one thing being fired by my boss, a woman who had clearly never liked me from the beginning. It was a whole different situation feeling let down by girls who had pretended to be my friends. I felt betrayed. Why in any of this had they not come to me directly?

Maybe it was just the girls. Maybe it was my boss. Whatever or whoever it was – I couldn’t wait to leave and get out of that place.

How to apply for a Working Holiday Visa in Australia

Want to know how to apply for a Working Holiday Visa in Australia, how much it costs and what you need to do once you’ve arrived? I’ve written this handy guide that covers everything you need to know from what to do before you leave to how to set yourself up in a new country.

PS – Don’t forget to read part two to learn how I found my second farm job, what happened there and what it’s like to live in a working hostel!

What about you? Have you ever done a Working Holiday Visa in Australia? 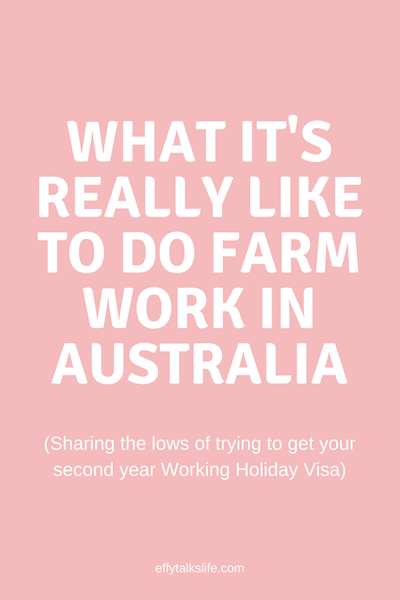