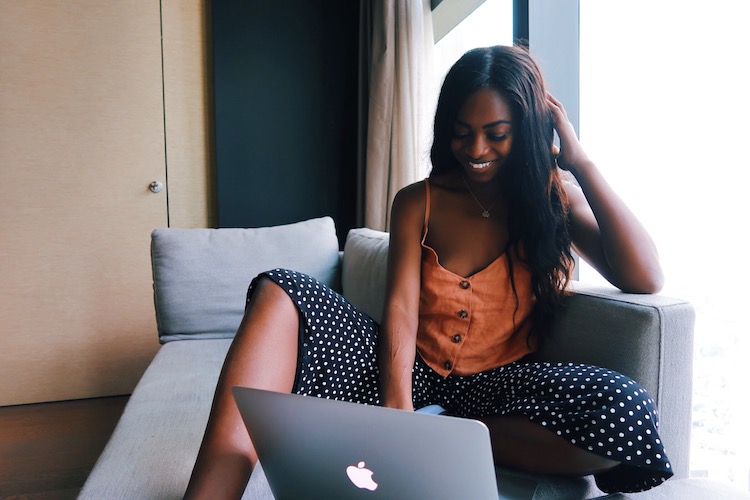 Last year I started the Digital Nomad Series with the hopes of using this platform to share the stories of incredible women who were working and travelling the world too. I’ve been lucky enough to interview 8 women over the past 12 months and during that time I began to pursue my own digital nomad dreams too. Though I’m still very much at the beginning of my journey I thought I’d add some of my own insight with what I’ve learned over the past year and my top 8 tips for working remotely.

Contents hide
1 What is a digital nomad?
2 My own digital nomad journey
3 Regularly set goals
4 Get an accountability partner
5 Only follow the advice of those you’d trade places with
6 Work incessantly on your mindset
7 Work out some kind of routine
8 Learn how to talk about your business
9 Don’t be afraid of change

What is a digital nomad?

There really is no one size fits all definition of digital nomad and there’s also no one term to describe those who choose to pursue the lifestyle either. From remote worker to location independent worker what all these terms have in common is that those who pursue these career choices do it so they can work from home – wherever in the world that home may be. Most digital nomads live a laptop lifestyle (working from their computers) whilst travelling the world hence the term nomads.

My own digital nomad journey

After a five year on and off complicated relationship in 2018 I made the decision to start blogging again. I was itching for purpose. But more than that I felt I had learned a lot and had important stories just waiting to be told. Through writing again something else began to happen, something which I’m sure many kind-of adults in their twenties go through.  Maybe even somewhat of a crisis. And so I began to think deeply about my life.

What I saw for myself in the future, who I was with and who I might become. I spent hours journaling and meditating. Rushing home from yoga to commit my thoughts to paper. As it turned out one persistent thought among all those dreams was starting my own business. The only problem was I had no idea where to even begin.

Some months later I e-met Instagram guru Elise Darma who became my business mentor. Over the next few months together we took my idea from inception to a living breathing concept. Like a child who needed my constant love and attention. I’d designed my website, completed my first work for testimonials and I couldn’t have been prouder. This was it.

When I started Effy Creative I really had no idea what I was in for. I just jumped and hoped for the best. To be honest, I’m still finding my feet, but I decided to write this post to shed some light on what I’ve learned so far.

Just because you no longer have a boss per se doesn’t mean you don’t still need discipline. By regularly setting goals you effectively become your own boss and have a point of reference to measure your progress again. On the flip side don’t beat yourself up if you don’t hit X amount of sales by X date. As time goes on what you once thought was difficult will become second nature, but until then allow yourself some room to breathe.

It doesn’t matter when you reach your goals all that truly matters is that you have them to begin with. That you’re working towards something. As a society, we’re so focussed on outcomes. Most of the times the real growth comes from the part that people don’t always get to see, the behind-the-scenes. The moments when you’re awake until midnight hunched over the dull glow of a screen.

Get an accountability partner

It’s challenging not having friends who are in a similar line of work. Finding the motivation to work when you’re jumping from location to location isn’t easy. To combat this I recommend getting yourself an accountability partner. Someone who isn’t afraid to call you out on your bullshit and someone who can be the other person in the ‘office’ to bounce your ideas off of. At the moment I have two I regularly check in with and I know they’ve pushed me to further my business.

If you’re looking to get an accountability buddy I recommend checking out Facebook groups like Girls Love Getting Paid While They Travel, Girls Love Travel and Women Who Travel. You can also reach out to people on Instagram, which is incidentally how I found both of mine. If you do choose to go down the Instagram root make sure to build a relationship first. You don’t want to ambush someone.

Once you’re ready the message can be as simple as Hey, I know we’re both working towards big goals at the moment and I wondered whether you’d be interested in holding each other accountable and check in with each other? If they say yes arrange a time to have a video/phone call on a consistent basis.

Only follow the advice of those you’d trade places with

While it’s important to ask others for advice, be mindful of who you ask. Does this person have results to prove they know what they’re talking about? Do they have your best interests at heart? I used to tell a close friend of mine about my business ideas and plans and it felt like my ideas were never taken seriously.

I don’t believe he wanted to see me fail we just had different approaches that didn’t necessarily mesh well together. Starting your own business is a struggle so you need to have a good support system in place for those moments when you need to be picked back up and to cheer you on when you make those all-important wins. 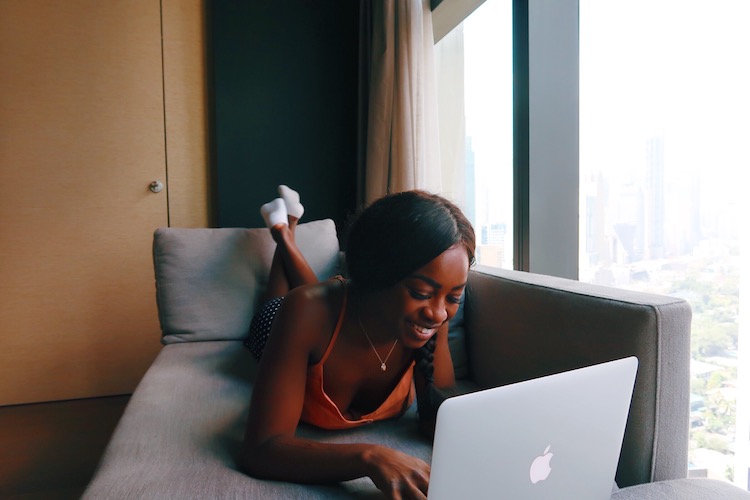 Work incessantly on your mindset

At some point in your journey, perhaps even throughout, you will experience self-doubt. I soon learned from my accountability partners that this was totally normal, yet rarely spoken about. You need to believe this can work before you even begin to see that money rolling in because it will take TIME. When it eventually does it’s most likely that for a while you still won’t see a penny of it as you’ll be investing it back into your business. Despite that, you need to know that this is what you’re supposed to do.

If you really want it you have to be willing to work for it. To access those subconscious places in your mind that might be rooting for to give up because they’re scared you might fail, or even more terrifying that you might actually succeed. Self-sabotage is a real thing and it’s not because you don’t want it to happen. It’s because your prehistoric brain is working overtime to protect you from the unknown.

Work out some kind of routine

One of my top tips for working remotely is to develop a routine. This might sound ironic, as for many the whole appeal of becoming a digital nomad is breaking OUT of the routine, but it’s that very same routine that will keep you grounded. After being conditioned to work in a certain way I found it really challenging when I was travelling for a few months not to have that anchor.

A routine doesn’t have to be meticulous planning of each task. It can literally be the decision to have breakfast in the morning and to have a to-do list with your focus for the day.  That’s it – it doesn’t need to be fancy.

Learn how to talk about your business

You need to shout from the rooftops about what you do, who you serve and most importantly what drives you to do it (money is not a good enough answer). Simon Sinek once famously said that people don’t buy into what you actually do but the reasons why you’re doing it. If you don’t seem passionate about whatever that reason is then people won’t be passionate about you either.

When I first started out I had a hard time telling people about what I did. Largely because Pinterest marketing is still so new that a lot of people really don’t get it. I knew myself why it was important, but I struggled to convey that to others. I was worried about being too in people’s faces because I wasn’t used to talking myself up in a ‘business sense’. To get clients you have to be in people’s faces – in their DMS, e-mail inboxes and more. You need to be liked and remembered. You need to be known as someone with something valuable to offer.

Don’t be afraid of change

For months I’d have a gnawing feeling that something wasn’t right. That I didn’t feel entirely aligned with my business and the services I was offering. Though I felt knowledgeable on the topic I felt I was spreading myself thin. I was beginning to dread it. But still, I persisted because I’d made my choice and I must have to continue with it. How could I give it up after I’d only just begun? But it began to take its toll. It felt like a weight at the bottom of my stomach constantly making me doubt myself. Soon it all became too much and I knew it was time to let go of that part of my business. After all, the good thing about change is you can always go back.

Later that day I had a call with one of my accountability partners and she noted how much lighter and happier I seemed. It was then I knew I’d made the right choice. I felt overwhelmed by emotion, but this time with happiness. I felt I could see again. Then it hit me. While this was all building up all I could think about was what my audience would think, what would this do for my credibility? I never once thought about how I would feel I’d forgotten to put myself first – the whole reason why I’d started my business in the first place.

I don’t regret starting my business. The connections I’ve made and the opportunities that have come from it. I love the work I do. But I haven’t ‘made it’ yet, I still have a way to go. The only difference is now I finally feel ready to do what’s necessary to get there. Don’t make the mistake of thinking you have to do everything alone – it’s not a one woman fight.

What about you?  Have you ever thought about becoming a digital nomad or are you one already?

What are your tips for working remotely? 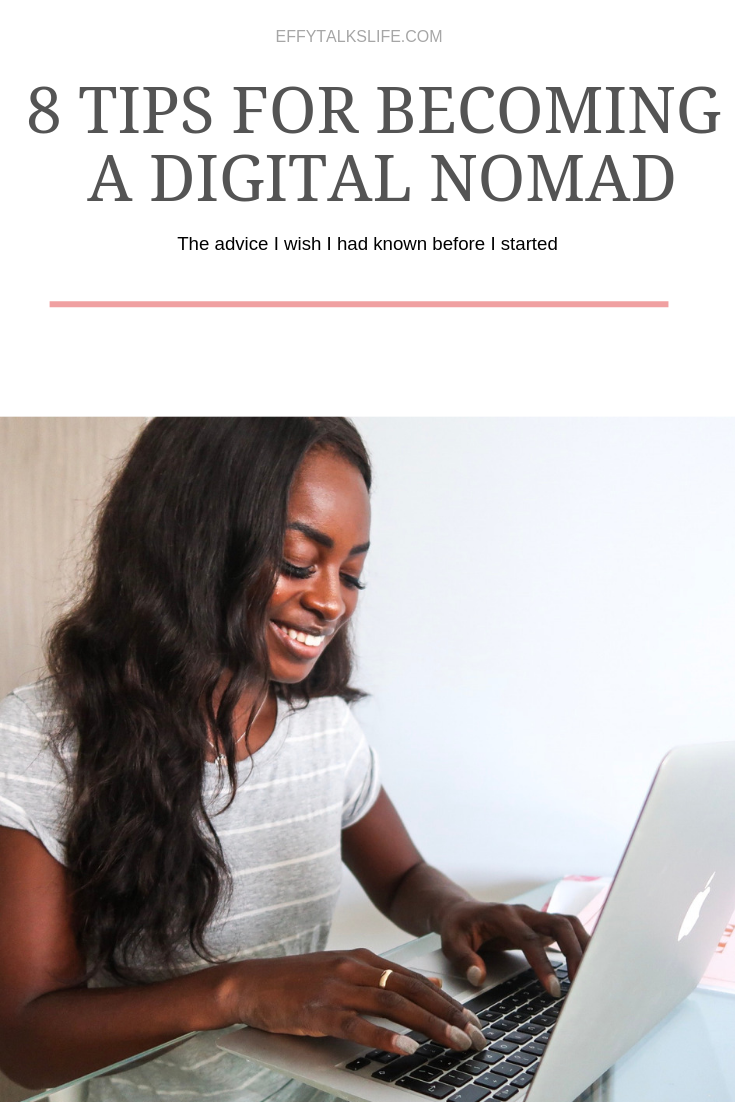