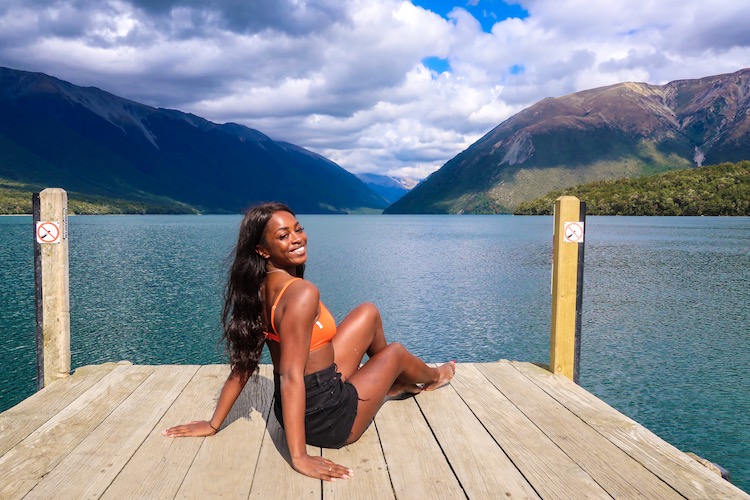 This post is sponsored by Kiwi Experience. But all musings/hilarious fails and dramatised readings in dulcet tones are delivered by yours truly.

In March 2019 I spent two weeks travelling the South Island of New Zealand with Kiwi Experience. In those 14 days, I used the South and Sound pass to explore an eclectic mix of epic towns and unique stops.

As I only had a short amount of I time, I decided to cram in the best of the best using a hop on hop off pass to see just the South Island. If you’re thinking of planning a New Zealand South Island tour don’t miss these 6 locations.

What is Kiwi Experience?

Kiwi Experience is a hop on hop off bus tour serving both the North and South Island of New Zealand. The hop on hop off style means although you pre-select your route you can stay in each destination for as long as you’d like! There are a number of different routes for either each individual island or you can combine both.

I opted for the Kiwi Experience South and Sound pass as it meant I got to see some of the most beautiful stops in the South Island (more on that in a moment) AND I had a day cruise to Milford Sound included too!

As part of the Kiwi Experience South and Sound pass, I started my journey hopping on the bus in Queenstown and looped around the island. This is particularly handy if you’ll be flying out from there at the end of your trip. And although it’s hard to pick favourites – these are the six spots on the New Zealand South Island tour that are guaranteed to make your trip one to remember.

No post about the New Zealand South Island highlights would be complete without mentioning Lake Tekapo. Have you ever seen something so beautiful it brought you close to tears?

That is how I feel about Lake Tekapo.

Having had the pleasure of visiting twice each time there was something truly magical about staring into the Gatorade blue glacier water with Mount Cook’s snow-capped mountains towering behind in the distance.

Lake Tekapo is also part of the UNESCO Dark Sky reserve making it one of the best places for stargazing at night. Don’t forget to look for the Effy cluster. 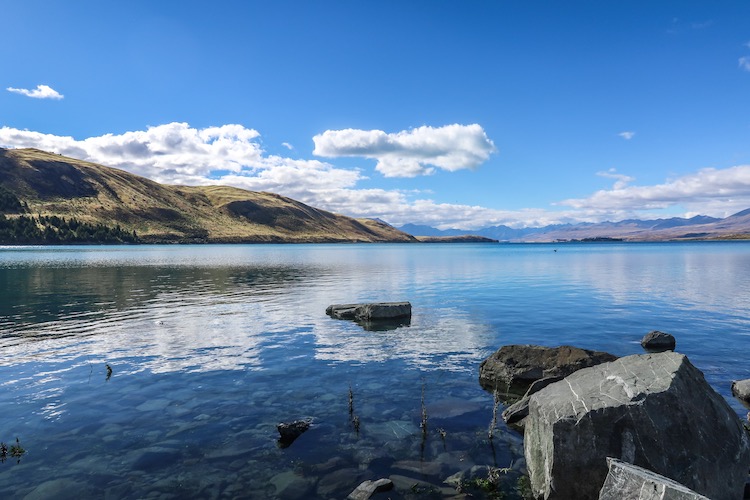 My love affair with the South Island begun with Queenstown. Our holiday fling began 30 minutes after landing when I was barreled into the back of a van clutching only a fistful of New Zealand’s finest dollars and my camera. Nope, this was not a Takenesque kidnapping but in fact the beginning of a delightful wine tour. They don’t call it the Adventure Capital for anything.

I only had one day in Queenstown before I began my journey down the coast. With only a few hours left before settling down for the night there was only one thing I wanted to do that evening – try a Fergburger. The infamous Fergburger is heralded as a sight to marvel. Both in terms of the mammoth queue that can be seen outside during all hours of the day and the burgers themselves. My personal favourite is the Sweet Bambi (don’t be put off by the name). A deer patty stacked with brie and smothered in berry jam.

Psst insider tip don’t fancy waiting in line? You can place an order over the phone to be picked up 15 minutes later. Added bonus you get to walk past the queue wielding your prize like a trophy. Been there. Done that. Skipped the queue. 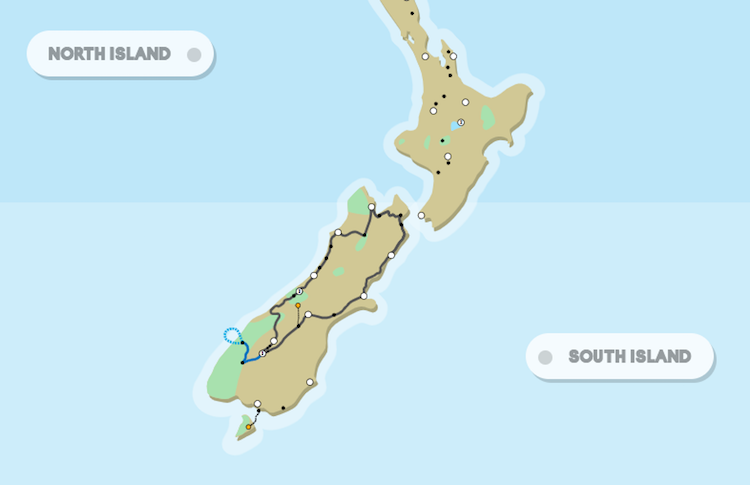 The Kiwi Experience pass I decided to follow (South and Sound) rounded up in Queenstown so I was left with three days at the end to explore to my heart’s content. During that time my two favourite activities were luging (think go-kart combined with bobsled) and bungee jumping from the highest bungee in Australiasia.

Plummeting from that ledge was was the most terrifying thing I’ve ever experienced, followed closely by waking up the morning after a night of partying and checking my Instagram Stories. If you want to see just how scary it was you can check out the video I shared.

And if none of these things take your fancy not to worry you have hundreds more options. Queenstown is a hotbed for tourists and as a result, has more activities than you can shake your hiking stick at. The hardest thing is knowing where to begin. If you’re looking for the best towns in the South Island of New Zealand I’d say Queenstown is a pretty solid contender. 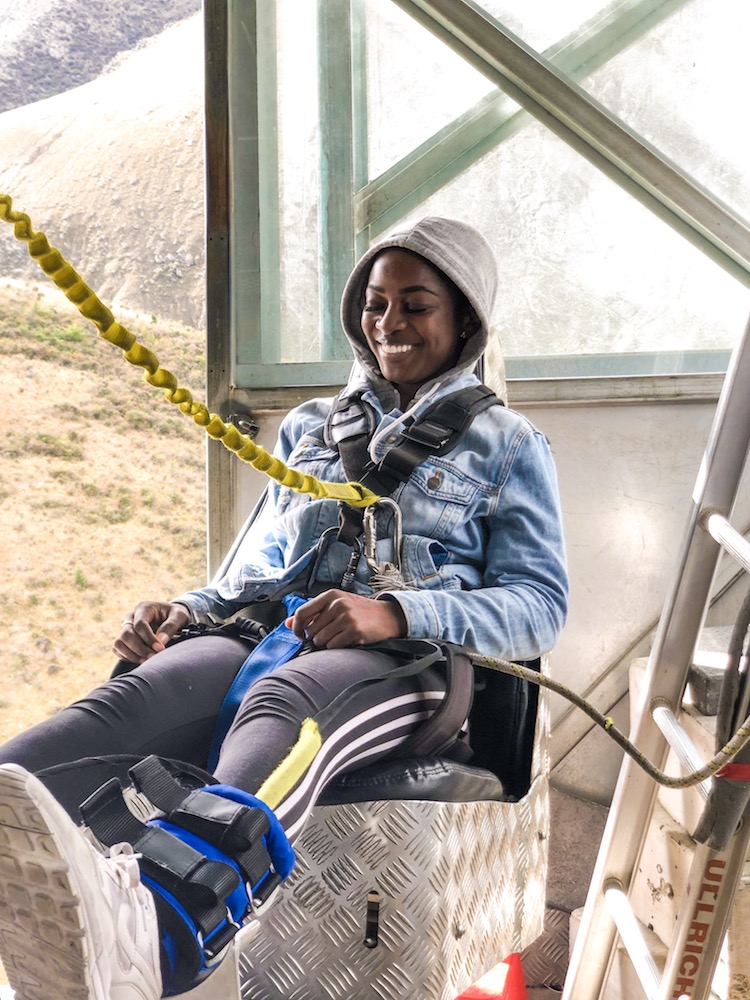 Milford Sound is a vast fiord in the south-west of the South Island. Here lush rainforest can be seen sprouting over jutting rocks, clouds surround mountains and over a hundred waterfalls cascading down the surfaces. Getting out to Milford for most is a day trip including a cruise or if you feel like ballin’ you can get a scenic flight over.

I chose the cruise option and took advantage of some time to get to know Vaughan the skipper of the boat. He shared that the best time to see the Sound is during a storm as many waterfalls appear more prominent. Once he even drove the boat in weather so bad that he had no visibility at all and had to turn back using customers who could see the boat’s trajectory on the TVs to guide his steering. But don’t let that put you off it really is pretty damn majestic.

The South Island is home to Christchurch the second-largest city on the island. Despite that, the city is still relatively small coming in at a population of just over 381,000. This city has seen a fair share of devastation over the past couple of years, but that doesn’t mean that you shouldn’t go.

In fact, memorials for both the earthquake and the shooting are a respectful way to honour the memory of those who have passed. Both reinforce the idea that tragedy cannot stop people from coming together and embracing the world we live in. 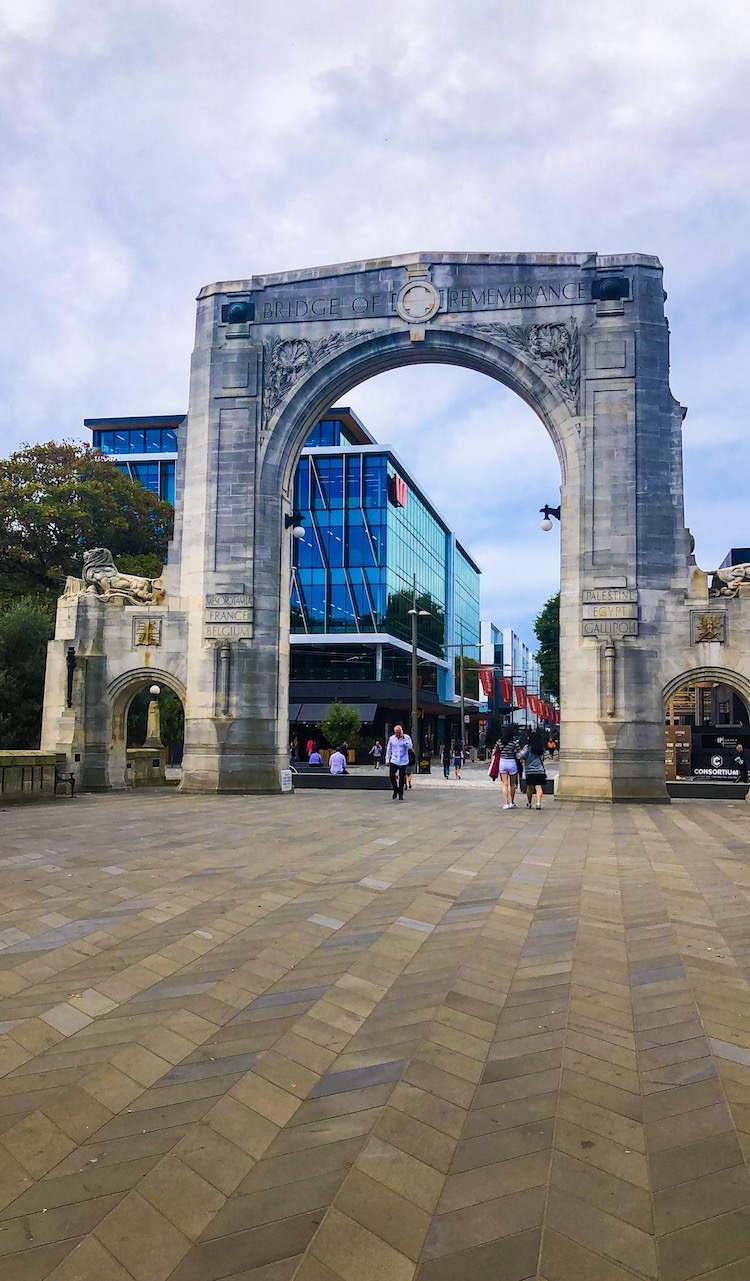 Did you know the South Island of New Zealand is home to some of the country’s best golden sand beaches? Kaiteriteri is just one of the many places you can get your fix. In addition to the gorgeous beach right off the main road, a short cruise will take you to the start of the Abel Tasman National Park track which is home to one of the best beaches in the world.

Want my advice? Wake up early to see the sunrise over the beach in Kaiteriteri and spend your afternoon exploring the national park. As for my second piece of advice – pack a cute swimsuit. 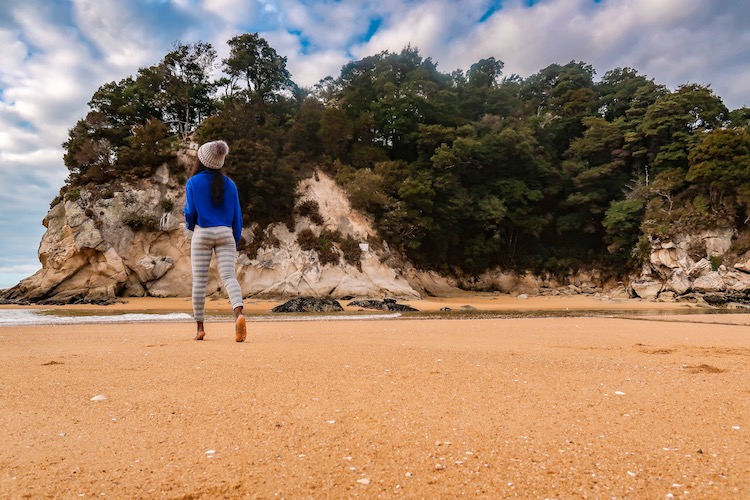 Unfortunately, during my trip, there was a storm which led to the collapse of a bridge and a ten-hour detour so I didn’t have the time to go. However, hearing stories from other members of my Kiwi cohort revealed that it was well worth a visit and it’s easy to see why.

Situated just 23 miles from Fox Glacier the sleepy town provides a perfect base for the famed Helihike, which includes a scenic helicopter ride up to the glacier and a three-hour hike on the glacier itself. At the rate climate change is going it’s not easy to say how long an opportunity like this will exist so if you get a chance I’d highly recommend doing it! If walking on the ice isn’t your thing you can just do a scenic helicopter flight, which I’m told is beautiful too *swoon*.

Final thoughts on the Kiwi Experience South and Sound Tour

Ultimately, what I loved most about the New Zealand South Island tour is that every town had it’s own self-contained culture. Something new to delight you at every turn whether you want to just sit and contemplate or strap on your boots and descend into the wilderness. Although there are so many incredible places to choose from I have full confidence that wherever you do it will nothing short of beautiful.

Psst – Fancy going on your own Kiwi Experience? Use the code EffyKiwi10 to get 10% off all trips (even those on sale!)

Do you have any questions about the Kiwi Experience South and Sound tour?